So, I finally made it to my final post about last weekend just in time for this weekend. 🙂 I swear last weekend felt like it was 4 days long because so much was jam-packed into it. I had a ton of fun, but it will be nice to slow down a bit this weekend.

After the race 0n Sunday, Michelle and I made the 4-hour drive back to Orlando, which included more Coldplay and Marky Mark than I’ve ever heard in my life and some drastic measures to stay awake.

Once Michelle dropped me off, it was time to get ready to head back out to Downtown Disney to see The Kills at House of Blues. By that time, I was regretting buying the tickets. I was wiped out and had to be up early the next morning for work so I wasn’t loving the idea of another 45 minutes in the car to get there.

The Kills are a indie rock band that I love, so if you’re thinking “who the hell are The Kills,” you’re probably not alone. If you’re interested, here are a couple of my favorite songs from them. (Those are YouTube links.)

The show was only half full which was nice for a change. No one spilled their beer on me, a guy twice my size didn’t stand in front of me, and I didn’t lose anything valuable for once. Although, I did almost forget my glasses at the merchandise stand, so at least I made a good effort to lose something. I also got a few cool pictures. 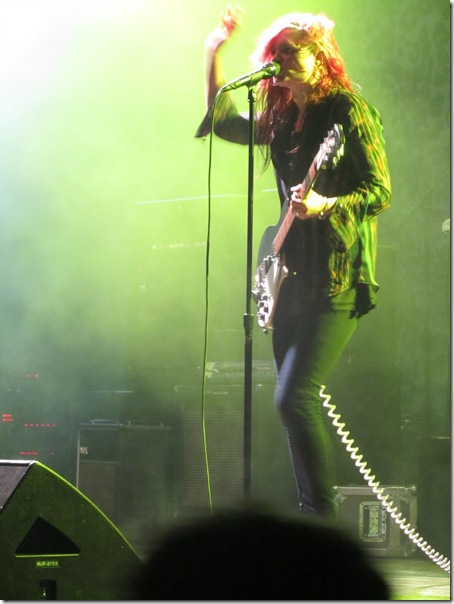 Go ahead and thank the hubs for this one. 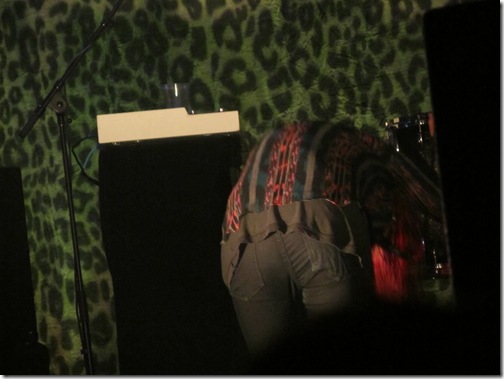 Most of the other shots were blurry. The butt shot – totally clear.

And a picture repeat for you from the end of the night.

The Kills were awesome and played all my favorite songs. Even though I was tired, I’m glad we got tickets because they don’t tour here often so who knows if I’d ever get the chance to see them again. The concert was over by 10:00 pm, I took a nose dive into my pillow by 11:30, and was a complete zombie at work the next day. But it was worth it.