New Year’s Eve weekend was probably the best ever. Two days before NYE, I begged my Austin Lover to fly in for our party. And she did!

We proceeded to do all the leisuring and all the drinking and all the eating all weekend. It was magical. Leisuring included not showering until 7:00pm on New Year’s Day and watching 10 straight hours of the Twilight Zone marathon on SyFy (my fave!). New Year’s Day is my favorite holiday. It’s the only day of the year where I can do absolutely nothing all day and have no regret. That night, we went to see Sisters and thought it was cute. By we, I mean hubs and I because Melissa fell asleep and snored loud enough that I got the stink eye from the girl sitting in front of her.

Eating included a trip to the Willow Tree in Sanford for the best German food in our area.

We ate sausages, spaetzle, potato pancakes, and a giant pretzel. I only got a picture of the pretzel, so hopefully your imagination can run wild with that one because I’m not posting it. I will post this picture of Melissa hydrating, all without taking her hand off her adult beverage.

And this opportunity that could not be passed up.

I don’t like fruit in my desserts and it is probably the best dessert I’ve ever had. Hubs even said after he took a bite that he would be OK with dying because life can only go downhill from here.

Drinking included a trip the The Barn in Sanford. The Barn is a country club and not a place I would normally go, but we decided to stop by for an hour before we went home because Melissa is from Texas and loves her country music.

(That’s our friend Jen on the left. Also, not a country fan.)

Four hours later, we were closing the place down, so I’m thinking we had a good time. Good enough for the gift shop to sucker Melissa into this gem of a hat.

And that ended her trip. It was short and sweet. She left the next morning and we were sad to see her go because our weekend of fun was over. We literally mourned fun on Monday morning. It was awful to be back to work.

Since Melissa left, I have been trying to do some adulting. School started on Monday and that’s about as adulting as I can get. This semester I’m taking two classes instead of one so I can take the summer off. Taking classes in Spring, Summer, and Fall last year almost threw me over the edge. This year, I will enjoy keeping my sanity, thankyou.

I’ve also been doing this.

I’m not going in order and some items don’t apply to me, so I’ve been substituting them. Like, kid’s clothes for socks and the mudroom for my extra home in the Hamptons. But man, I can’t wait to get home every night and add to my Goodwill pile. It’s so liberating!

I finished season 1 of Jessica Jones. Hubs and I liked it, but JJ made too many bad decisions that started to get annoying. Also, I like how she’s super strong when she’s fighting Nick Cage, but then she gets KTFO by someone who doesn’t even know how to fight. Too much inconsistency going on. And to my friend (who doesn’t read my blog) that said Jessica Jones is better than Daredevil: YOU ARE INCORRECT.

Apparently, season 5 of Homeland began and ended without my knowledge. So we are currently watching that. It started a little slowly but it’s getting pretty good now.

And that’s it for now. I’m running the Shark Bite half on Sunday, so hopefully I don’t pooch that race like that last one. Stay tuned.

My Favoritest Holiday of them All

New Year’s Eve turned out better than I thought it would. Hubs and I had no plans and didn’t know what we wanted to do. So, we decided on the 30th to invite a bunch of people over and see if there were other plan-less losers like us.

More people showed up than we expected and I only knew 50% of them (friends of friends and whatnot), but it was a good time that included a lot of Fireball (on my part), champagne at midnight, a broken martini glass, a few spilled drinks, fireworks, and Duck Dynasty confetti all over my kitchen floor. (Whoever brought that is off the invite list!)

I also got to hang out all night with my friend (and extremely sporadic blogger), Klainie, who I haven’t seen in awhile, which makes no sense because we work together.

The house across from us was having a party as well and I think we were in an unspoken fireworks-off, which I’m sure is a thing. 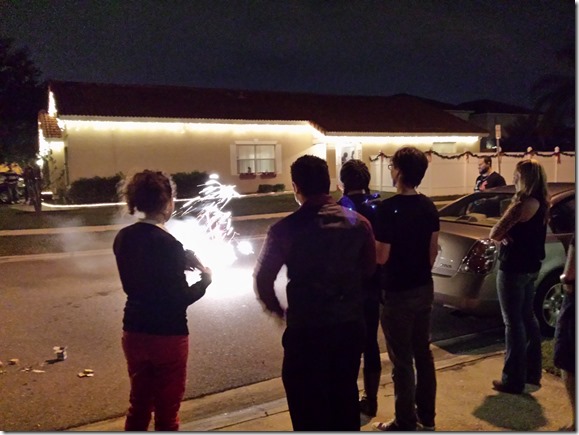 What they won in height, we made up for in originality when our friend sprinted through the neighborhood with a lit firework. 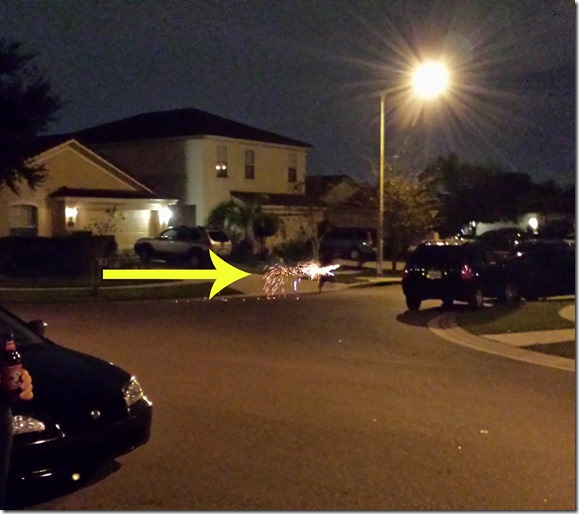 Don’t try that at home, kids.

Hubs and I ended up going to bed around 3am. Our friend, Jamie, didn’t make it that long. She has a knack for falling asleep when the mood strikes and she did not disappoint. 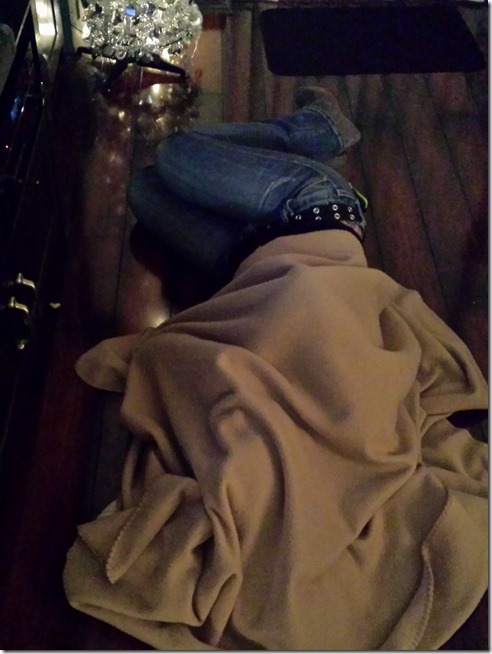 I realized this year that New Year’s Day is my favorite holiday. It’s the first day where the stress of the holidays is gone and you can just enjoy yourself and be absurdly lazy. Plus, the first day of the new year always feels fresh to me. I love it. I never feel that way any other day.

So, on my favorite day of the year, I ate pizza for breakfast, took a surprisingly long nap, and watched hours and hours of the Twilight Zone marathon on SyFy. I look forward to that marathon every year. It is totally my favorite thing about New Year’s Day. (And no, watching it on Netflix is not the same.) Those old episodes are so good and they remind me how much I love the ride at Hollywood Studios. I even managed to run three decent miles in the evening, so that Fireball tried and failed to keep me down.

I hope you all had a safe and happy new year and that your livers are in the process of forgiving you.

Last night, hubs and I attended a masquerade party thrown by the good folk at Adventure Martial Arts (that’s where we take our martial arts fitness class). It was held at a country club in Casselberry, but first we met up at our friend Carrie’s house before heading over.

Our friend’s Ale and Jason were already there and we had to get pictures with them when we realized that hubs matched Ale and I matched Jason. 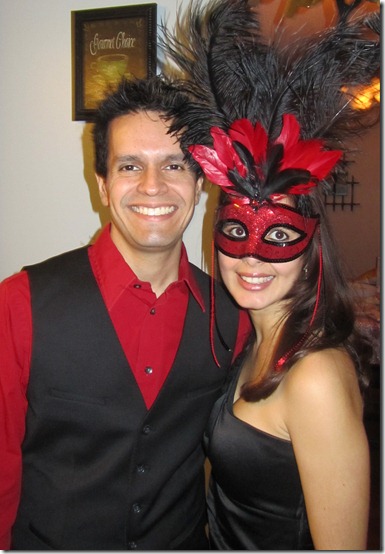 After about an hour, we drove over to the country club where I immediately sensed danger across a crowded room.

Those are cupcakes from Sweet. And they’re not the mini ones either. Those are the big boys. Speaking of those cupcakes, I’d like to take this time to make a public apology to my thighs and ass for last night.

Hubs and I shared a plate that included our first cupcake. 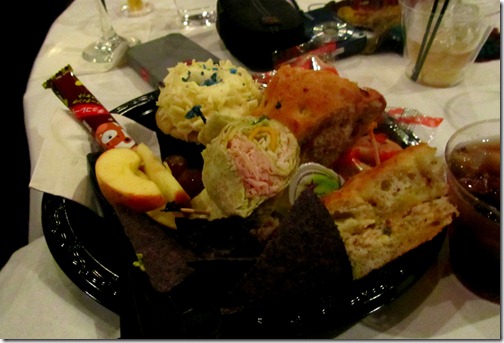 I think all the food was from Jason’s Deli. I’ve never been there before but man, it was all so good. I might have to put that into my permanent restaurant rotation.

While we were getting a drink at the bar, I noticed they had “Dude” flavored vodka. 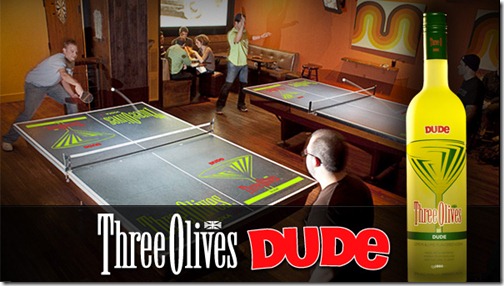 I was equally worried and intrigued about the flavor. Particularly since it was yellow. So I got it. 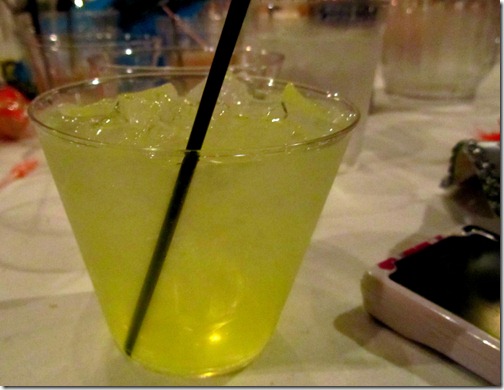 I’m happy to report that it tastes like Mountain Dew and not urine.

Toward the end of the night, the cupcakes looked lonely. I couldn’t let them spend the new year alone, so I adopted another one and gave it a home.        In my belly. 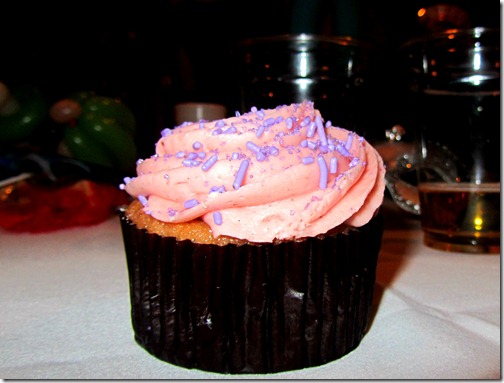 Throughout the night, we hung out with friends. 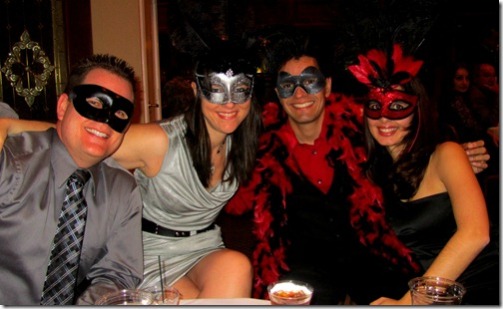 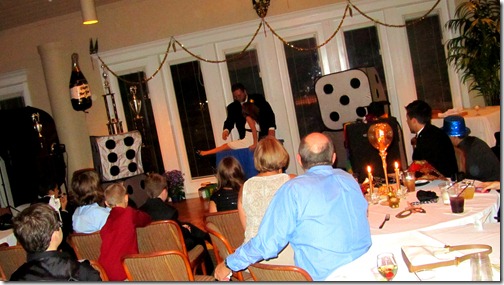 And waited till midnight to ring in the new year.

These are Sheila’s awesome masks (she teaches our fitness class). She bought them in Italy. Incidentally, the only way it’s possible to look as good as Sheila in a picture is to have her wear a full face mask. 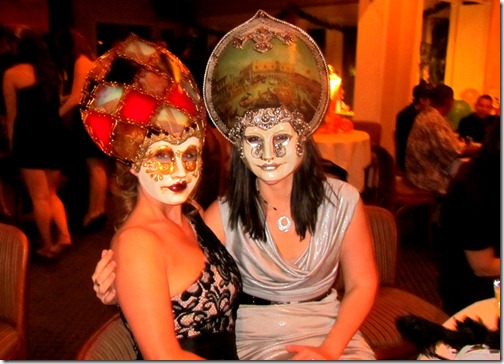 Of course, hubs was a hit with all the ladies. I can’t leave him alone for one second. 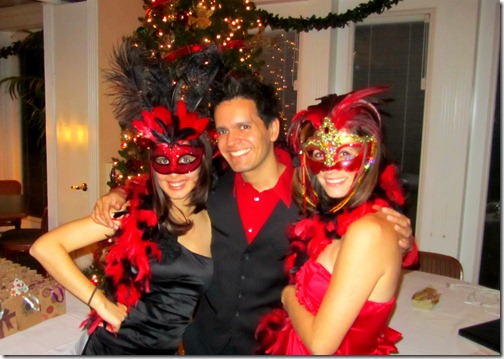 At midnight, we all went outside and lit floating lanterns. It was really cool and reminded me of the movie Tangled. 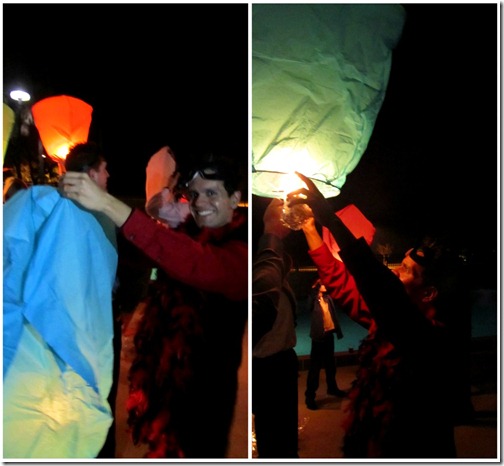 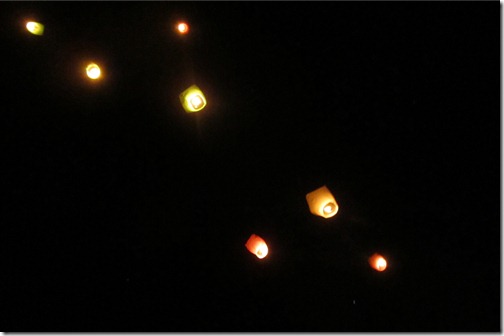 Then I got a new year’s smooch. 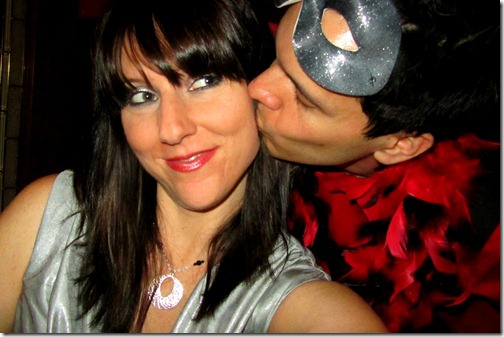 After midnight, we all went back to Carrie’s house where I proceeded to molest the hummus she brought back from the party. Have you had hummus from Jason’s Deli? I wasn’t even hungry, but I could.not.stop eating it. So delicious.

My holidays haven’t been the best this year so I gotta say I was pretty grumpy at the beginning of the night but had an unexpectedly great time and a great new year. Now I’m going back to watching The Twilight Zone marathon on SyFy and making a new year’s butt-print in the couch.

What did you do last night?

Back to Real Life

Happy New Year!
I’m officially back home in Orlando after a fun week of visiting family in San Diego and eating way too much good food. I had a great time with my brother…

(Maybe next time I see him, I’ll even brush my hair. I said maybe.) 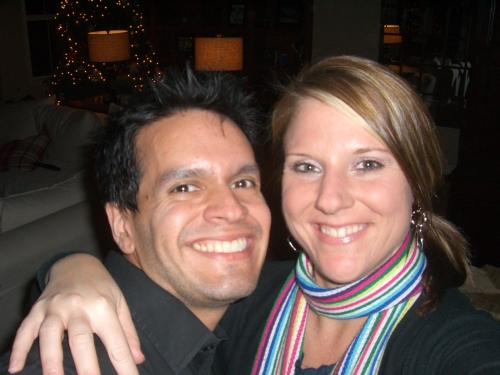 (I was really trying to get the tree in the background. Well, I say, holiday spirit = captured!) 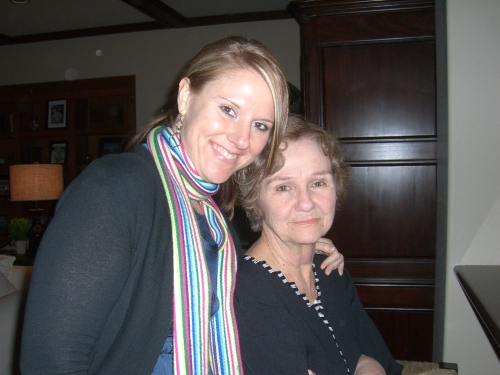 (She was really just hanging around for the birthday cake.)

My niece and nephews…

(Masters of the Self Photo) 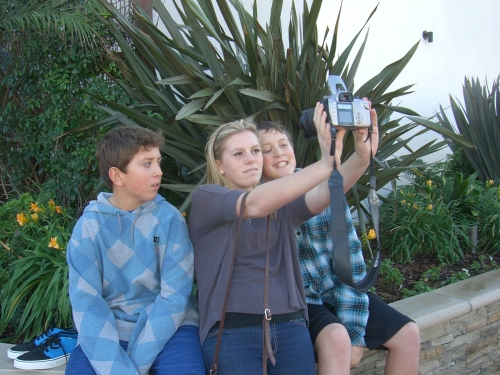 By the way, my nephew on the right has full use of both of his eyes. Not too sure what’s going on there. I’d love to post some pictures of my sister-in-law, but she’d find out and I might not get invited back.

So, after all the delicious food… 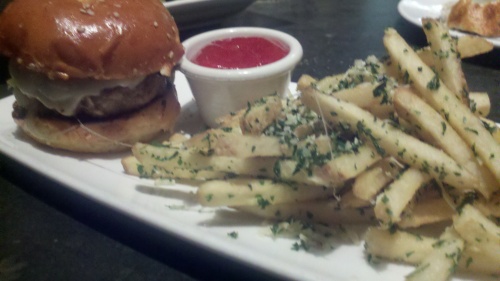 (Picture it. Fifteen 12-year old boys singing karaoke to “Single Ladies.” I’m pretty sure I saw two of them not even needing to look at the lyrics.)

(Cristal and Easy Cheese. Nothing but the best for this girl.)

We were all pooped and looked something like this… 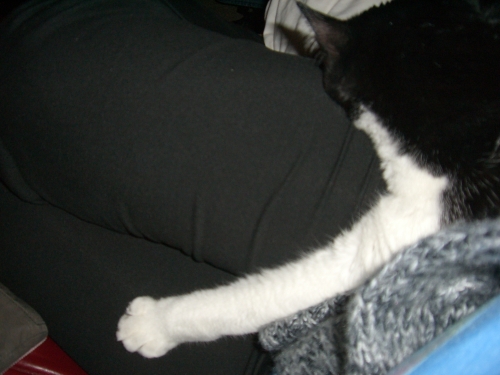 Thanks for all the hospitality big bro. 🙂 Love ya!