I haven’t talked about Crossfit in awhile, but that’s still happening. I go three days a week, which means I spend five days a week in some kind of muscle pain. I’m definitely back to my normal strength since the installation and even benched a 115lb PR last week that made me feel like a freakin’ hulkamaniac.

That lasted an hour until I realized you can’t see my muscles because they are covered by a layer of delicious cupcakes and brownies.

I thought I would share last night’s workout with you guys since I haven’t posted one in awhile. It was on the easier side as far as Crossfit goes (super thankful for that because I was tired) and I didn’t have too much trouble getting through it (except for the knees to elbows – those are always hard). Well, today things hurt. They hurt a lot. So maybe it wasn’t as easy as I thought. 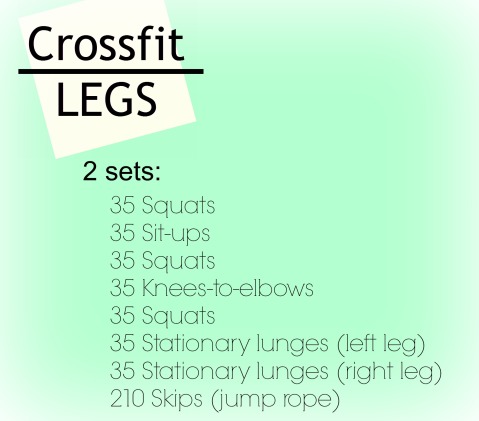 Substitute knees-to-elbows with another ab exercise, like v-ups, if you don’t have a bar to hang from. You can also fake the jump rope to make this into a no equipment workout. It’s a good one. You’ll feel those jump ropes after the lunges, I promise. Then, you’ll thank me after Thanksgiving because you didn’t turn into a stuffed turkey.