Tag Archives: I lived to PR another day

I’d say race morning started with a wake-up call, but it didn’t. Our hotel wake-up call was an hour late because of Daylight Savings. I woke up on my own 3 minutes after the call was supposed to come. I said Michelle’s name when I realized the alarm didn’t go off, and I swear she shot straight up in bed like a vampire rising from a coffin. No back bend or anything. Straight up from the hips using abs only. It was the craziest thing I’ve ever seen. 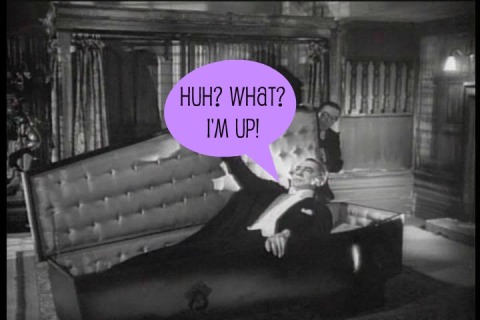 Michelle’s back-up Jimmy Fallon ring tone went off about a minute later, so at least we wouldn’t have missed the race. (If you don’t have that app, it’s worth the $1. Get it!) Then 15 minutes later, our annoying neighbors were up and arguing again and I yelled at them to shut up. Fun.

After getting ready, we drove about 2 miles to the race start at Van Wezel where parking was almost too easy, just like it was last year. We walked up to the starting line and had to make our way through all the runners to get closer to the 2 hour pacer. (Not that I needed him, of course.)

I had been feeling pretty good about this race all week long, especially after Gasparilla last weekend. That is, until Saturday. I’m not sure what happened, but my will to PR kinda went out the window. Of course, I was still going to try anyway but something changed with my mood and I still felt that way Sunday morning. 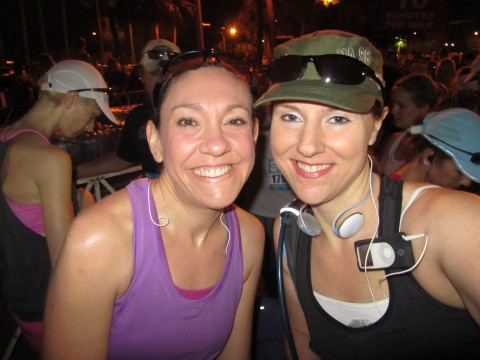 (I look so tired there.)

After a pretty terrible sounding National Anthem, we were off. The course was the same as last year, except this time we ran around St. Armand’s Circle instead of turning around just before it and some of the neighborhood miles were shortened a bit. Mile 2 and 4 involved going over this bridge. 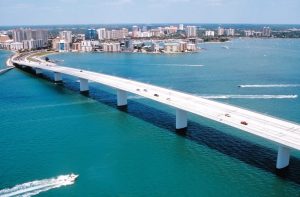 I was feeling ok for the first 2 or 3 miles, but coming back over the bridge really took a lot out of me. That’s when my mental state took a nosedive, not that it was great to begin with. It was also really difficult for me to breathe for the first 7 miles because it was so humid. I felt like I couldn’t get enough oxygen, so my speed slowed. Every time I looked at my Garmin, I was at a 11:30 pace. I knew I wasn’t going to make my goal early on because I didn’t feel like I had it in me.

After mile 5, I gave up mentally. Every song on my iPod was pissing me off so I ran without music. Not even the spectators dressed as bacon and eggs cheered me up. I suck at running in hot weather, so that wasn’t doing me any favors. Either was my lack of sleep, my running shoes, or my stomach issues that started at mile 9. But really, I could blame my performance on so many things. The fact is, I couldn’t do it. And I’m not getting faster.

I have a really big problem getting past mental blocks. Unlike Michelle, once my state of mind plummets, I don’t try harder and it doesn’t challenge me to break though that barrier. I just shut down and give up. So after mile 5, I didn’t even see the point of running the race when I didn’t have a shot of improving upon past races.

Around that time, I had a side cramp that forced me to walk for a bit and my stomach was still on the decline.

During the final stretch, some tall, thin, fast lookin’ dude ran past me and said something like, “come on, you can catch that 2:15 pacer” and I wanted to punch him. I ran slowly for a few minutes while my side stitch went away and noticed the pacer wasn’t that far in front of me, so I just decided to take that guy’s advice. There was no way she was crossing that finish line before me. So I booked it.

I probably passed about 7 different people down the finisher’s shoot – including that stupid pacer – to finish in 2:14:45.

Michelle was waiting for me at the end of the finisher’s shoot. She PRed by 37 seconds for a 1:58 (on the dot) finish! I was super proud of her and glad one of us made our goal. Now, she has the world’s ugliest metal to remind her of it.

The finish party was just like last year with all sorts of food from First Watch like bananas, bagels (with peanut butter!), muffins, and yogurt parfaits. 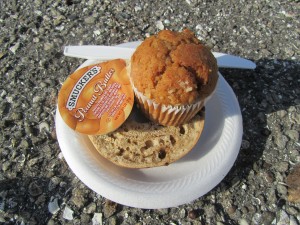 And this time we found the beer.

And we found Theresa and Ryan. 🙂

Overall, I still really like this race. I like the course and I like being back in Sarasota. It feels like being back home.  The course is also really accurately tracked. My Garmin (and Michelle’s) read 13.11 miles at the end. It’s really nice to pass a mile marker and then look down and see your pace coming up on the screen.

Of course, I was super disappointed in my time and I say this knowing that some of you would kill to run a 2:14 and others would kill to not be injured and just be able to run. Well, I would kill to run anything under 2:02. But I guess there’s always next season. It’s not like I’m going to stop running.

So, the last half marathon of the race season is done and hopefully I’ll see that sub-2:00 later this year.

Tagged as I lived to PR another day, Race review, Sarasota Half Marathon 2012