So, I finally made it to my final post about last weekend just in time for this weekend. 🙂 I swear last weekend felt like it was 4 days long because so much was jam-packed into it. I had a ton of fun, but it will be nice to slow down a bit this weekend.

After the race 0n Sunday, Michelle and I made the 4-hour drive back to Orlando, which included more Coldplay and Marky Mark than I’ve ever heard in my life and some drastic measures to stay awake.

Once Michelle dropped me off, it was time to get ready to head back out to Downtown Disney to see The Kills at House of Blues. By that time, I was regretting buying the tickets. I was wiped out and had to be up early the next morning for work so I wasn’t loving the idea of another 45 minutes in the car to get there.

The Kills are a indie rock band that I love, so if you’re thinking “who the hell are The Kills,” you’re probably not alone. If you’re interested, here are a couple of my favorite songs from them. (Those are YouTube links.)

The show was only half full which was nice for a change. No one spilled their beer on me, a guy twice my size didn’t stand in front of me, and I didn’t lose anything valuable for once. Although, I did almost forget my glasses at the merchandise stand, so at least I made a good effort to lose something. I also got a few cool pictures.

Go ahead and thank the hubs for this one.

Most of the other shots were blurry. The butt shot – totally clear.

And a picture repeat for you from the end of the night.

The Kills were awesome and played all my favorite songs. Even though I was tired, I’m glad we got tickets because they don’t tour here often so who knows if I’d ever get the chance to see them again. The concert was over by 10:00 pm, I took a nose dive into my pillow by 11:30, and was a complete zombie at work the next day. But it was worth it.

Last night, hubs and I met up with Lisa to see Evanescence in concert at House of Blues in Downtown Disney. This makes the third time we’ve seen them and they always put on a good show. 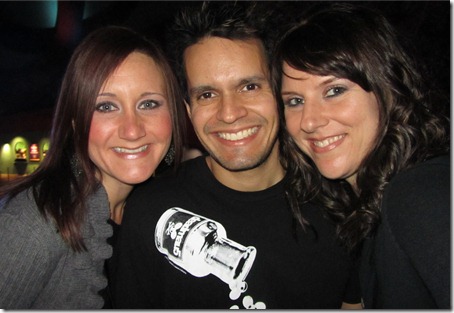 So horizontal stripes make your butt look bigger, but not your boobs. I see a flaw in this system…

We checked out the merchandise and hung out in the balcony until the show started. Since I worked the next day, I made sure to practice moderation. Two drinks at a time instead of three. 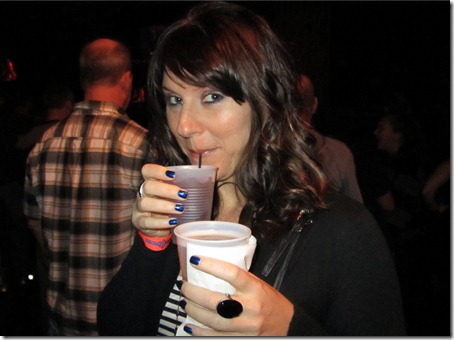 That’s a Crowne and Diet Coke with lime. If you never drink Whiskey and decide to try it, I highly recommend not getting a second one right away. You may think your sober, but the whiskey says otherwise.

The show was sold out and the opening band (Rival Sons) was Southern rock and totally the wrong sound for an Evanescence opener. I think that’s the first time I’ve ever really noticed mismatched bands before.

Before the show started, Lisa and I pulled out the old lady glasses so we could see each other better.

On a side note, we’ve had a lot of people in the past ask us if we’re sisters. My MIL calls her my twin. What do you think? Twinsies? I’m sure it doesn’t help that we seem to be on the same hair dying schedule throughout the year.

At one point, Lisa was having too much fun so we had to tell her to SIMMER down.

I forgot to take my camera off the indoor setting, and you have to hold the camera really steady on that setting to not get blurry pictures. Since I haven’t perfected the holding-a-drink-rocking-out-picture-taking trifecta yet, only a couple came out. 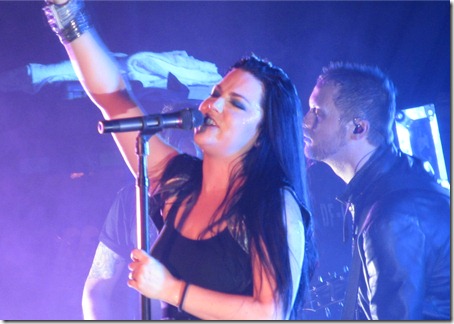 We had a lot of fun, they did the two non-hits that we really wanted to hear, and Lisa made the executive decision that Amy Lee has made her girl crush list. It was a good night. 🙂

Once we got back to the car, I realized my iPod Touch was missing.

I never used to lose anything and now I only lose super expensive things. Like when I lost my Droid Incredible 3 weeks after I bought it or when I left my new prescription glasses at a bar or the time my engagement ring flew into the crowd at a concert. I shouldn’t be allowed to have nice things.

Tell me about something expensive you lost so I can stop pouting about my iPod.

Last night, LMFAO (and Jason Derulo, Karmin, and Outasight) played at the House of Blues as part of the XL 106.7 XL’ent Xmas concert series. LMFAO was the headliner, so tickets sold out pretty fast. Hubs regretted not buying tickets before the sell-out because he’s been liking LMFAO more and more recently. A couple days ago, tickets opened up again on Ticketmaster so hubs was all over it. We were LMFAO bound!

We arrived at HOB over an hour and a half after they opened the doors and still didn’t miss any of the opening bands (which was our reason for arriving late). So, we hung out at the bar for awhile and people watched while Outasight (not too bad) and Karmin (terrible) performed.

There was a really good view from the bar, particularly when the tallest man ever stood in front of me.

I saw one guy accidentally spill a drink all over his girlfriend and then ask her why she did that to herself. She was not amused. That was fun. We also noticed someone with a clever drink holder.

Jason Derulo finally came on stage. I don’t know anything about him except that song that reminds me of Beetlejuice, but I thought he was pretty good. He definitely has a good stage presence. And abs. 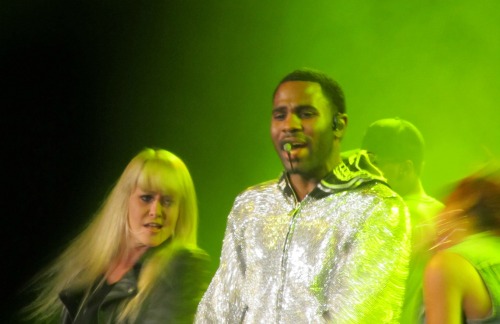 At the end of his set, he did back flips across the stage and a hand-stand where he was popping up and down on his hands. The dude has some serious acrobatics in him.

Finally, we were ready for our headliner. LMFAO is two guys. But only one of them was there. 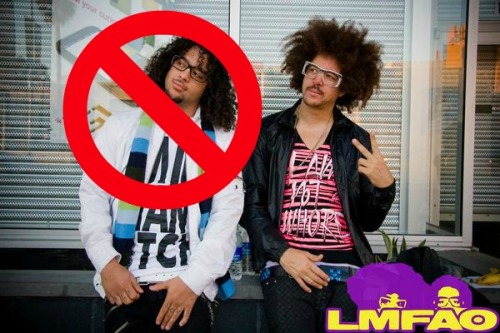 I wasn’t familiar with their first song. The second song was I’m in Miami Bitch, the third was Shots, and the fourth was Party Rockin’. By the fourth song, I was getting worried they were slamming out all their hits so fast. I mean, I’ve been to a LOT of concerts and no artist does that. 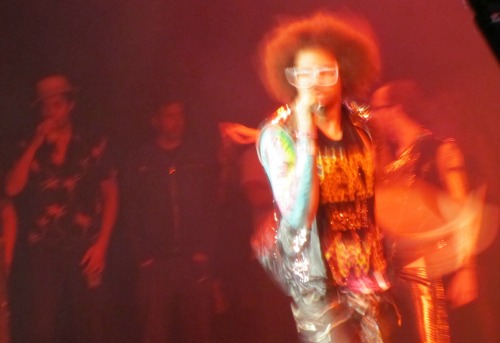 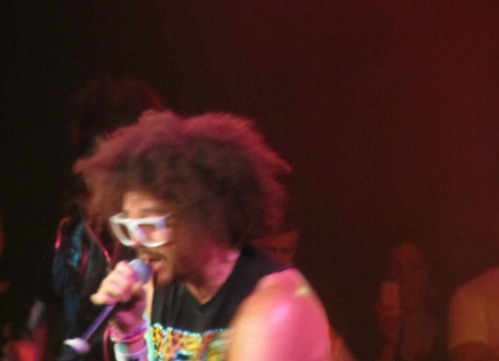 The fifth song was I’m Sexy and I Know it.

And that was the end of the concert.

Five songs, 30 minutes, for the bargain price of $60 per ticket.

We stood there dumbfounded after the concert because we couldn’t believe it was over. And we were PISSED. I’ve never seen a headliner play shorter than an hour and 15 minutes, even with other bands. If the tickets were $20, maybe it wouldn’t be so bad. For $60, we feel so ripped off. So of course I started tweeting nasties after the show. To LMFAO’s credit, he has a lot of energy on stage, sounds good, and can work a crowd. For 5 songs.

The XL 106.7 XL’ent Xmas concert series has shows every year at HOB and I will never go to another one after this. Giving LMFAO another chance is up in the air.