So the anniversary thing happened on Saturday. We decided to go to a friend’s birthday party that night, but beforehand, we went out for dinner to celebrate our anniversary and be reminded that we are not in Vegas anymore.

Hubs is looking a little tired there (probably of me), but it’s the only picture that turned out sort of ok.

Hubs always picks where we eat and it’s always a winner, but for the first time since we started dating (yep, 11 years), I picked the place. I chose Hillstone.

That’s the view from our table. Not too shabby.

I figured we couldn’t go wrong since I had been there before and looooved it. Plus, I’ve been wanting to take hubs there for awhile now. Well, this time it wasn’t so amazing. I’m not sure how two different experiences could have been so different, but they were.

I ordered the bleu cheese wedge as an appetizer. It’s actually listed as a meal, but I refuse to believe a wedge of lettuce is a meal.

The wedge is topped with bleu cheese, tomatoes, bacon, and roasted beets. I had this before and loved it. It was still great, but it was swimming in bleu cheese. There was just way too much – and I am one of those more is better girls, so for me to say that probably killed a kitten somewhere.

Hubs had the smoked salmon appetizer. 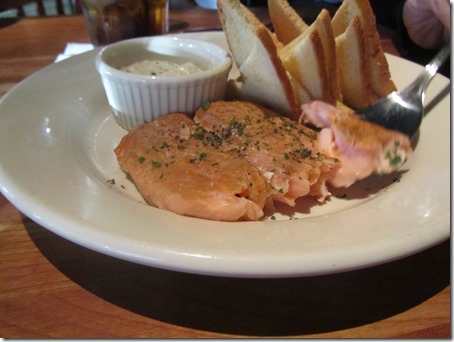 He loved the salmon but those little pieces of toast that you’re supposed to eat the salmon with were hard enough to chip a tooth.

For my main course, I ordered the veggie burger. 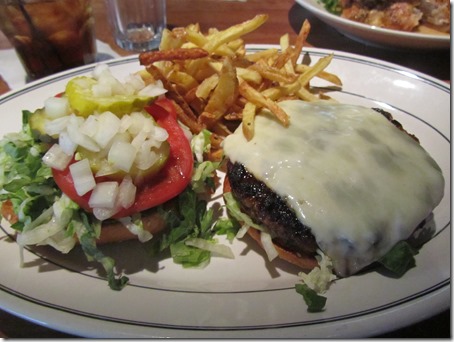 I know you’re thinking – nice restaurant and the veggie burger? LAME. Well, I tried a ton of things the last time I was there and this was the thing that I (and everyone else) loved the most. I am no where near a vegetarian, so for me to love a veggie burger has to mean it’s made out of dancing unicorns dressed in glittery tutus singing Ke$ha.

Of course, I didn’t care for it. I just don’t even know how that’s possible. I took the first bite and was immediately disappointed.

Hubs had the roasted chicken with barley salad. 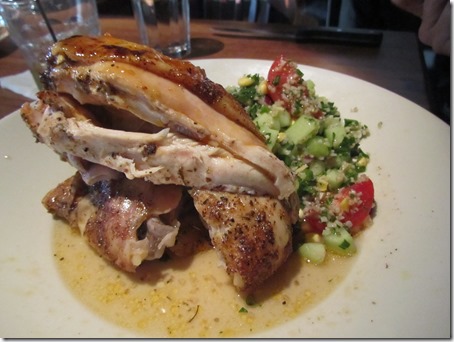 That is an entire chicken.

Hubs mentioned that he’s never seen an upscale restaurant serve that large of a portion before. We could have both ordered that and shared it. He said it was good but nothing that Publix couldn’t make in their deli.

Ok, so I thought dessert might save the day. We were thinking of going for frozen yogurt but I remembered the key lime pie being amazing and hubs loves him some key lime pie.

Hubs asked me if I was drunk the last time I was there and that’s why I thought everything tasted so good. I swear I was stone sober! So, yeah. Neither of us cared for it. Later that night at the birthday party, two people mentioned that Hillstone is like that. Sometimes amazing, sometimes not. (??)

Anyway, now I’m forbidden from choosing our anniversary dinners. Hubs=10, Wife=0.
I suggested an anniversary re-do. So, we’re going to do dinner next weekend, get all fancy, and pretend it’s our anniversary. Hubs is picking the place.

Anyone else have an anniversary fail?

Happy 4th Anniversary to my hubs! 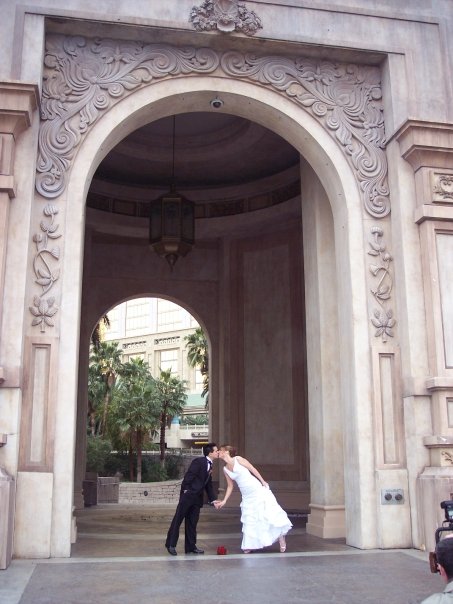 Or 11th anniversary, depending on how you look at it. Here we are 11 years ago, two months after we started dating. 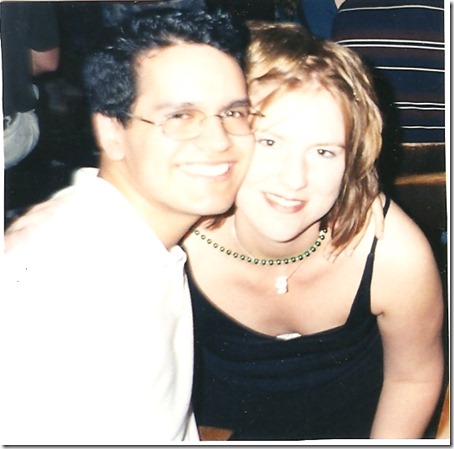 Eleven years later, we’re a little more fit, hubs can see without his glasses, and I decided I don’t like my hair super short.

So just for fun, I’m copying this girl’s post and doing a little not-so-newlywed game for our anniversary. Hubs and I answered the same questions and hopefully we’ll have the same answers. (This should be interesting…)

1. How long have we been married?

3. What is his worst habit?

Her: Using the floor in our bedroom as a “closet.”
Him: Leaving papers all over the place. (<—also true)

6.  If you were going to order us drinks, what would you get us?

Her: Jack and diet for him. Crowne and diet for me.
Him:  Some sort of whiskey and diet. Or vodka and soda. Or beer. I dunno. I usually ask first, she drinks everything.

7.  What is your favorite thing about her?

Her:  My sense of humor.
Him: Her laugh and how she thinks everything is funny.

8.  What is his favorite movie?

Her: Being a voice on The Simpsons. You’re rich, get to go into work in PJs, and can live a normal life because no one really recognizes your face.
Him: Housewife  < —jerk 🙂 But yeah, that’s true too.

Her:  There are so many. Let’s go with the toilet paper going under instead of over.
Him:  Pretty sure it’s something I do.

Her:  Robert Downey Jr is an acceptable answer but there are so many.
Him:  I don’t know, you have so many. Jason Ackles.  (<— He means Jensen.)

Alright, that wasn’t as bad as I thought it was going to be. I guess I’ll keep him a little while longer. 🙂

It’s time for another Five for Friday. It’s a random one, but then again, when am I not?

Our anniversary just happens to fall on our every other Friday off work schedule, so we’ve celebrated so far by doing the dishes and cleaning the pool. Tonight, we might even even enjoy a carb with dinner. We get pretty crazy after three years. Or 10. Nothing like a wedding to reset that dating anniversary and wipe out 7 years of hard labor.

2.  Right now, hubs is off getting his hair done. Presumably to look pretty for me for our anniversary and keep up with my lifetime of hair color changes. 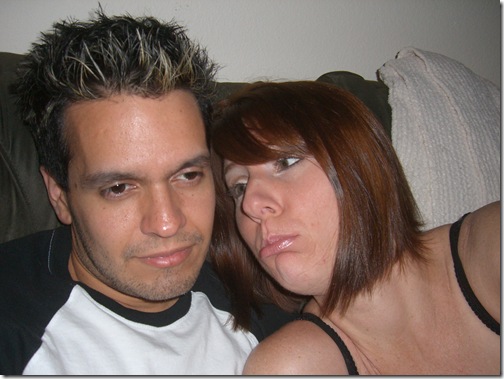 Incidentally, that last picture is the look he gets on his face when I talk about running.

3. Race weekend month is here! Tomorrow, Michelle and I leave for Tampa to run the Gasparilla Half Marathon on Sunday. It’s my favorite half marathon of the 11 I’ve done and the first one I deemed worthy of repeating, even with the guy slapping people’s asses at the turn around last year (<—-race review link). I haven’t used my Camelback in a long time but I think it’s time to bust it out again. I’m not sure how I’ll do, so right now I’m just hoping to beat last years time (2:16:55) which I really hope is possible since that time included 2 “special deliveries.”  Then again, I haven’t run a half faster than 2:18 in a year, so who knows what will happen out there.

4. I ran a few times this week in my new Mizuno Wave Riders. Once with the Superfeet inserts and once without. I don’t think those inserts work for me because everything felt much more normal without them. Now the shoes seem a little narrow and rub my feet the wrong way. So these aren’t the right shoes for me either. EFF.

What should I do? Pad up my feetsies with double socks and band-aids and run in my new shoes this weekend, or run in my old shoes that possibly have too many miles (350) on them already and could be the cause of calf pain?

I’ve already informed Michelle that I will need her to turn down my bed and put a mint on my pillow this weekend. I think I also want her to announce my name Price-is-Right style as I walk into any new room. I don’t think I’m asking too much.

I was going to do a post on how today is me and the hub’s dating anniversary. We don’t celebrate it anymore since we got married, but if we did, we’d be celebrating 10 years together.

Here we are 10 years ago, before a little weight loss and the hub’s PRK surgery. 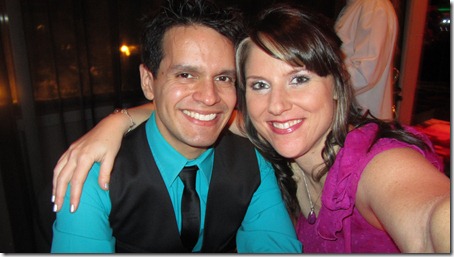 Ten years is a long time. I don’t know if there’s anything else I’ve done that long. Well, except my husband.

And then I realized our anniversary was actually yesterday. It’s nice and fitting that I forgot again since I’ve  gotten the date wrong by a day for the past 10 years. Why can’t I remember January 8th? I don’t know. But I always have to look up the release date of Jeepers Creepers on DVD to be sure, because we rented it the day it came out and that’s the night we kissed for the first time. Nothing says romance like Jeepers Creepers. Try it. You’ll see.

Anyway, when we first met I started keeping this shoebox of memories.

It basically contains cards that he’s given me over the years, notes he’s left on my car, menus from restaurants we went to on our anniversaries, and movie stubs from some of the first movies we’ve seen.

I forgot about the box until this weekend. I also forgot that I saved the first stuffed animal hubs ever won for me. 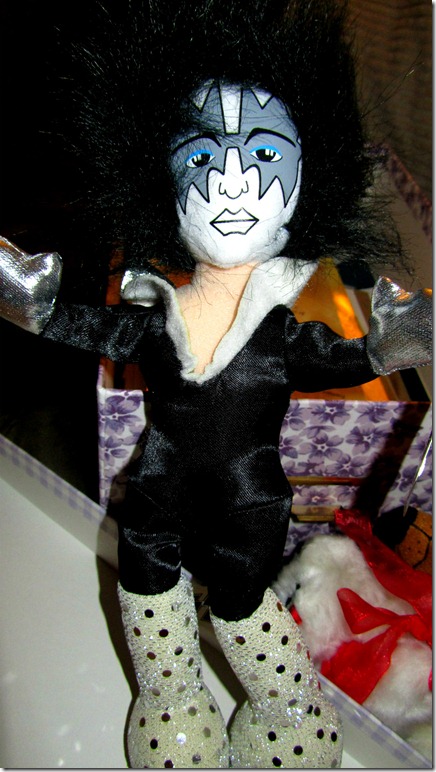 For all of you men out there that are trying to woo your ladies, I’m here to tell you that a Justin Long movie and a Kiss doll should do the trick.

Anyway, I just wanted to say happy anniversary that we don’t celebrate anymore to my best friend, greatest love, and the best man I know.