The good news is, my hip is back to normal! It’s so nice to run again (slowly) and get into and out of a car without pain. The bad news is, that leaves me with five weeks to train for my half instead of eight. Not ideal when I was hoping for a PR. I have a backup race in mind a few weeks after Best Damn Race just in case. Although, I’ll probably register for the backup even if I do PR because I feel like this race season has been devoid of races and I need some more in my life.

Speaking of running, you may know that we have an interesting relationship. Besides the random injuries and faceplants into the sidewalk, I’ve also run by someone holding another person an gunpoint and been bitten by a dog. Basically, all signs point to me quitting running for life. Now I’m so paranoid when I run that I carry pepper spray in my hand because surely it will come in handy some day when someone wants to jam me into their trunk.

That brings me to Saturday. I was not jammed into a trunk, don’t get too excited. I went for an eight mile run in the afternoon (don’t ever go away 68 degree, breezy afternoons). I brought my pepper spray with me but since I was already carrying a water bottle, I kept it in my SPIbelt. On my way back to the house, I  noticed a dog ahead of me on the sidewalk off its leash. It was a smaller dog but because of my dog history, I crossed to the other side so I wouldn’t be near him (her?). For those visual learners… 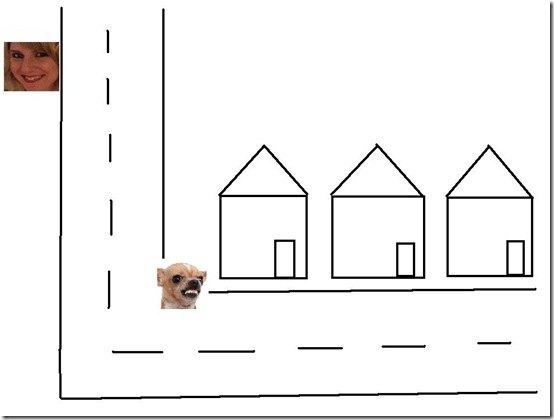 I was completely alone on the street and didn’t see his owner anywhere. At one point, I lost sight of him so I figured he had gone home. But no. No, no. Once I turned left (still avoiding the dog side of the street), the dog started barking and running after me, literally at my heels. Another dog (also off its leash) came out of nowhere and joined him. So now I have two little pissed off dogs running after me. I tried to ignore them and kept running but after about 1/10th of a mile when they didn’t back off, I stopped, faced them, and shouted “No!” to see if that would have any effect.

I started running again and so did they. At this point, I’m thinking, “I can’t believe I’m going to get bitten by a dog…AGAIN.” I was freaking out a little so I did the only thing that came to mind: I stopped, turned around, and threw the rest of my water in their faces. The water actually stopped the joined-out-of-nowhere dog. He ran off into the street and was almost hit by a car that slammed on the breaks in time. But the other one, he wasn’t so happy.

Hey! It was spring water. Not like I threw tap water in his face. Anyway, I start running again but after about a five second delay, he started barking and running at my heels again. At this point, I’m contemplating my next move. I thought, “holy shit, I’m going to have to kick this dog.” Before you animal lovers get all crazy, this dog was a threat and I will straight-up kick a dog before I let one bite me again. I literally do everything I can to avoid dogs when I’m out in public. Unless it’s a friend’s dog that I know, I keep maximum safe distance. Since being bitten, they scare the shit out of me. So I decided this was going to happen. I’m going to kick a dog and I’m going to feel like shit afterwards but I won’t walk home bleeding with rabies. I stopped, turned around again, shouted something to the effect of “What the fuck dog??”, waited for him to get closer to make my move, and then…he just stopped. It was almost like he knew because he backed off. I’m not sure where he went because I was outta there, but it was probably to do something dangerous and cool to impress his dog friends.

This isn’t the only time I’ve been chased by a dog but it’s the only time when I really thought I was in danger. I’ve had dogs off leashes chase me with their owners standing there doing nothing. I just hate asshole dog owners with no respect. When I got home, I realized I had pepper spray with me, which I probably would have used if it was in my hand. And of course now, I will never keep it in my SPIbelt again. When I told hubs that I was almost bitten by a dog he said, “again?”

So yeah. Dogs hate me.

14 responses to “Dogs Hate Me”