1. The gas station by my house sells pizza super early in the morning. 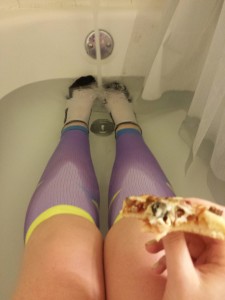 That was the only good part of my 16-miler last weekend. The good news is I didn’t have any calf or shoulder pain. The bad news is I had a new hip/glute pain. It’s always gotta be something, right? Training started out great but now my long runs are getting worse by the week. I did more walking in the last three miles than running, so I’m not sure that’s good news for the 18-miler I have scheduled tomorrow morning.

2.  I’ve been trying out some new running fuel.

Usually I eat PB&Js on long runs since it’s the only thing that agrees with my stomach, but since Hammer Nutrition is really low in sugar, I’m hoping I can find something to interchange with my PB&Js. (No, this isn’t an ad. This is me trying to not poop while running.)

During my last marathon, I ate two PB&Js (1/4 at a time) before the thought of them made me want to barf, so I hope this will help me not get that feeling. So far I’ve tried the Perpeteum Solids which worked fine but they took a while to chew. I just ordered the regular Perpetueum (maybe it’s a drink? I couldn’t tell online) and some gels. I’m hoping they are in the mail today because I need them for tomorrow.

3.  I saw Guardians of the Galaxy.

I know, along with everyone else in the world. I was prepared to hate it because the trailer did nothing for me, plus I hate talking animals and there is that whole raccoon deal. I don’t think talking animals are cute, I think they are stupid and they make me stabby. I could never watch Babe for this reason, but I digress. With that all said, I thought the movie was great and the raccoon was kinda, sorta funny and not annoying at all. Definitely in the top 5 best superhero movies for me.

4.  Last weekend, I went out for an annual ladies night with some of my favorite people. 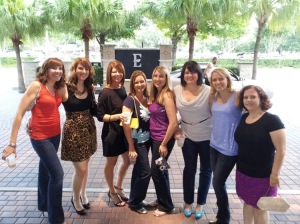 I’m starting to mourn my long hair, I have to admit.

It was a fun time. There was pre-drinking, there was bar hopping, there was Cheyanne winning eight lemon drop shots in a twerking contest.

On a side note, Cheyanne complains she’s not on my blog enough, so I hope she’s happy now.

Ok, back to ladies night. There was Michelle rubbing her boobs on my back. 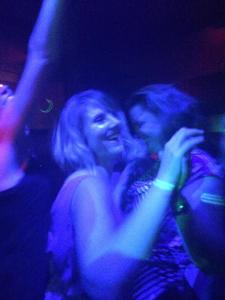 It was pretty much everything one could ask for in an annually planned ladies night. The most important part of the night however, is that I got into several clubs and bars with my driver’s license picture looking like this.

I have hubs to thank for that. Never leave your license unattended. That is the lesson here. And seriously, bouncers took one look and were all, “Yep! That’s you!” WTF.

5.  Hubs and I finished season 1 of The Fall last night.

Since we are still a month away from our normal shows coming back for the fall season, we started Firefly. No, I have never seen it nor have I ever been interested in watching it even though Joss Whedon is my homeboy. Only time will tell if I have the 13-episode patience for a space western. Space western. Honestly. Those words should not go together.

We usually don’t feed her a lot of fruit because rabbits don’t digest sugar well, but she got extra birthday treats including a piece of banana with a little peanut butter on it. She ate that while pretending she’s a lop ear. I must say, she doesn’t look a day over four.

What movie did you think you’d hate but ended up loving? There are so many and it’s usually ones hubs guilts me into watching, like Lilo and Stitch. I thought that movie looked like a piece of crap and I was crying like a baby halfway through when Stitch got lost.

19 responses to “By the Numbers”