The Day Before the Best Day Ever

Hubs and I arrived at LAX and took the shuttle over to the cluster that is Budget Rent-a-Car. Seriously, they do not have their shit together. Every seat was taken on the shuttle and it was packed with standing people. People had luggage on their laps because the luggage rack was full yet the driver kept stopping to pick up more people. Then we waited in a line for a half hour to get our car, which may not have been as annoying as it was if it wasn’t for the shuttle situation. Anyway, we got our car, a Chevy Impala to be exact, also known as the least fun car ever. But whatever, it got us from point A to B.

We stayed at the airport Hilton and had a pretty nice view of the pool and the airport from our room. Oh hey there four jacuzis!

We only enjoyed the pool from the room. We napped instead because sitting for a 4.5 hour flight and then standing in line for 30 minutes is hard and we are old. After nap time, my brother picked us up at the hotel.

He drove up from San Diego to visit once he realized I was in town for fun instead of work. We met up with one of my brother’s friends in Manhattan Beach (where he lived before he moved to San Diego) and walked from his friend’s house to Shellback Tavern. We admired all the multimillion dollar houses we can never afford along the way. 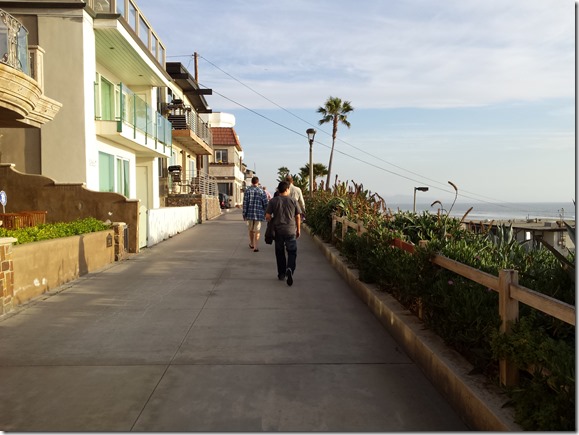 That was a two mile walk. Good thing it’s scenic because I’ve never put in so much effort for a beer.

Later on when the hunger set in, we walked over to Manhattan Beach Brewing Company for more drinks and food. I ordered the most amazing Mediterranean Chicken Kabob. I mean, it was unbelievably delicious. Just look at it in all its low-light glory.

It looks like a hot mess in that picture but if you are in LA, you need to eat at this place. Everyone loved what they had.

After that massive platter, I needed the two mile walk back just to make room for more beer. We dropped my brother’s friend off at his house and then went to another bar, played some pool (which I am horrible at), and had a few more drinks but our livers had enough and we were tired, so we called it a night. My bro walked back to his friend’s place and hubs and I caught a cab back to the hotel where we passed out hard by 11:30.

Wednesday morning, I wanted an omelet. A spinach, tomato, and mushroom egg white omelet from IHOP specifically. Sorry to all you haters that only love fanci breakfast, but IHOP is delicious and I will forever love them.

Omelets are especially delicious paired with those cheesecake pancakes in the background.

Normally I hate eating at a chain when I’m in a different city, but eh, it happens sometimes. Hubs must love me because he did not want IHOP. He didn’t even want what he ordered but toward the end of breakfast, half of my pancakes went mysteriously missing and hubs was in a surprisingly better mood.

After breakfast, we had a little time to kill so we wandered around Westfield Mall for awhile. I love that mall. It has every store I love but really, all I need is an Express and a Mrs. Field’s in a mall to make me happy.

You all know what happened next. And if you don’t, read this. We were only in L.A. for two days, but we packed in so much fun that it felt like we were there a week. We had a really great time. It’s hard to be back to real life.

7 responses to “The Day Before the Best Day Ever”