Oh hey blog. I’ve been neglecting you and I don’t mean to. I was about to say how I’m so busy and have no extra time but that couldn’t be true since I can recall large periods of time doing absolutely nothing. So here’s the nothing I’ve been up to:

1. I made it to season 4 of Justified. I love it! Especially the dialog and anything Boyd does. I’ve also never seen a Marshall kill so many people, so often. No one seems phased by it, particularly his boss. There were three consecutive episodes in season 3 when he didn’t kill anyone and I thought something was wrong. So now, hubs and I just like to see how many people Raylan will kill. Hubs loves it, because then he gets to say:

Every.time. But now he likes to try to trick me and make up some elaborate story like he’s not going to say it, but it always ends the same way.

3. I’m officially registered for the Chicago Marathon! When I say registered, I mean I signed up for the charity I want to run for and am good to go to start my fundraising as part of their running team (more on that later). That means I need to run 26 miles again and train during the summer.

4. I’m still going to Crossfit three times a week. I feel like I never talk about it anymore, but we just recycle the same workouts over and over so I have nothing new to share. But every now and then, my trainer likes to surprise me with something new. Hubs and I did this workout last week and our legs were “hurts to stand up from the couch” sore for two days. 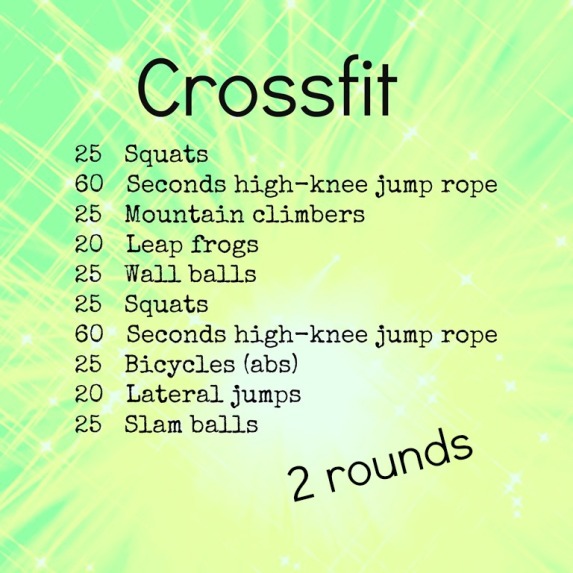 I did the lateral jumps over two low steppers while hubs used a higher box that I was too afraid to use because I felt like I would land on my face. So use a box or find a couple phone books (those exist, right?) and put them on the floor. It’s all good. We almost did a third round and I’m really glad we didn’t because I don’t even want to know how that would have felt. I think the leap frogs are what got me since I don’t normally do those?

5. One of these things is not like the other. 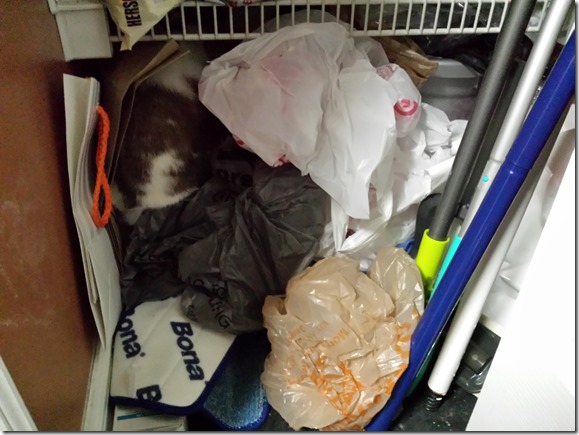 I heard some rustling in the pantry and I found our little mess maker.

6. This is the office of a dude that sits near me.

That desk is my nightmare. I don’t know how it’s possible to work like that. Every time I walk by, I feel the need to organize something of my own. I might even venture to say it looks cleaner than normal in this picture. And OMG I just noticed there are pants on the floor.

7. I didn’t drink in the month of January. Ok, there was one (planned) exception, but this is big news. I basically became a hermit to do it. I’m excited to say that it’s February now, a.k.a, open boozing season, which I celebrated on Saturday night by putting on pants with no elastic and going out.

(From left: me, my bestie Lisa, hubs, and our friend Angie)  #proof #fitfluential

Anyone entering the lottery for Chicago? What other good fall marathons are there? I need a second one and I’m afraid it’s going to be Space Coast if I don’t come up with something better.

22 responses to “By the Numbers”