I feel like I’m slacking on the random posts lately, so here we go.

I don’t expect to run a PR but I’d at least like the option for the race to not suck. Thanks mother nature, for sucking the life blood and Christmas spirit out of me. If anyone needs me, I’ll be the beet-red, sweaty one at the end blaming the weather for my finish time.

2. I bought Jon Hamm some mineral chews. Of course, he only eats the frosting off the top and leaves the rest.

I know dogs start to resemble their owners but is it possible for hamsters too? I mean, his only loves are running on a wheel and eating frosting. I’m feeling a kinship here.

4. Hubs and I have taken to making Pants snuggle with us each night in hopes that she’ll learn to love being held.

When we sit with her, she’s probably a six instead of her normal ten on the Snuggle Hate Scale so we’re hoping she’ll end up loving it. Anyway, holding her creates this furnado that swirls around my mouth and lips that makes it hard to keep holding her. Wiping my face with my hands or sleeve makes it 10x worse because her fur sticks to everything. It’s like mass-shedding is her natural defense mechanism against love.

4.  If you’ve been reading awhile, you may notice I’m not doing the American Horror Story recaps this year.

I’m definitely still watching and I super love it this season. I’ve even been converted to an Emma Roberts fan, who I should naturally hate because she’s dating Evan Peters in real life, and that really detracts from me pretending he’s my boyfriend.

5. Hubs and I are almost done with the last season of Spartacus. We’re liking it though I don’t think it’s as good as the first seasons. Now. I don’t want to seem ungrateful for all the muscles and six-pack abs and full frontal man-nudity. I’m grateful. I am. But do 90% of the sex scenes realllly have to involve this guy?

I don’t want to say that I find him unattractive but…ok, yes I do. Surely you could get someone else willing to sign that every episode nudity clause.

Other options for consideration:

6. A new person started at work last week. She sits on the other side of me, but she never leaves her cube so I’m very familiar with the back of her head. Anyway, I saw her face this morning so I decided to introduce myself and her first words to me were, “Oh, I didn’t expect you to look like that.”

7. I meant to post this picture awhile back but forgot. This booklet was left on my front door about a month ago. 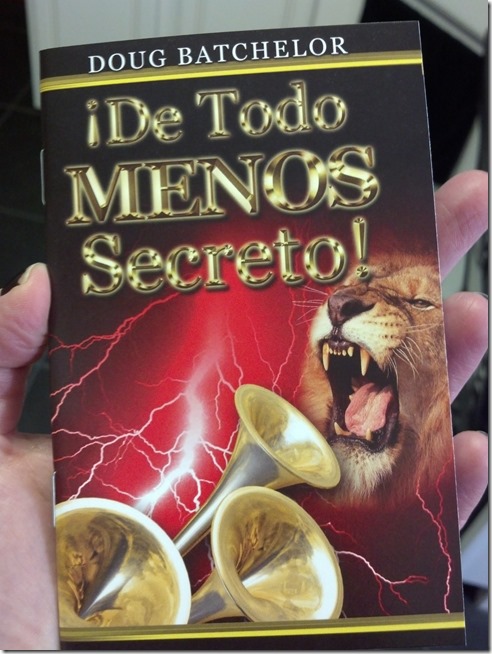 Man. Nothing goes together quite like some horns, lightning, and lions.

That’s it for me today. I hope everyone has a good weekend. If someone could send me some Winter weather, I’d appreciate it.

Tagged as By the numbers

24 responses to “By the Numbers”