The Rest of DC

So, I need to back up a little. I already talked about all the good food during my weekend in DC but I didn’t talk about the fun. Because there was fun, even though Melissa hates fun. < — true statement

I landed in DC on Friday. Melissa met me at the airport and we took the metro back to her place. If there is one thing I don’t understand, it’s public transportation. So thankfully I have friends that are smarter than me.

Once we arrived at her apartment, someone there was very excited to see me.

Roo has no clue that she weighs 50 lbs, that is for damn sure. She likes to drape herself all over you and get comfortable. I’m going to start doing that to my friends and see how it goes.

Friday we had a pretty big night planned, if I do say so myself: eat dinner in, have a few drinks, and watch Scandal. That’s how us old ladies do. But somehow, we still ended up at a bar around the corner from Melissa’s place where I had some hot whiskey/cider/cinnamon drink that was delicious.

Shortly after said drink, I found out that Pendulum was playing across the street at a place called the 9:30 Club. It hurt my soul that Melissa did not care that there is a concert venue, with big named artists, just steps from her place. I would make that place my second home.

We decided to go to the show if it didn’t start too late. Of course, it was sold out, which worked out just as well, because I was wearing capris and I can’t be seen at a concert in capris. (Don’t ask.) We went for a much more capri-friendly giant frozen yogurt which somehow made me just as happy.

Saturday morning, we got up early and took Roo for a hike on a really pretty trail in Georgetown.

That picture there is the closest I’ll ever get to fall here in the land of perpetual Summer. Anyway, the hike was an actual hike where we had to climb up and down things and hold on to tree branches so we didn’t fall. So, it was legit. 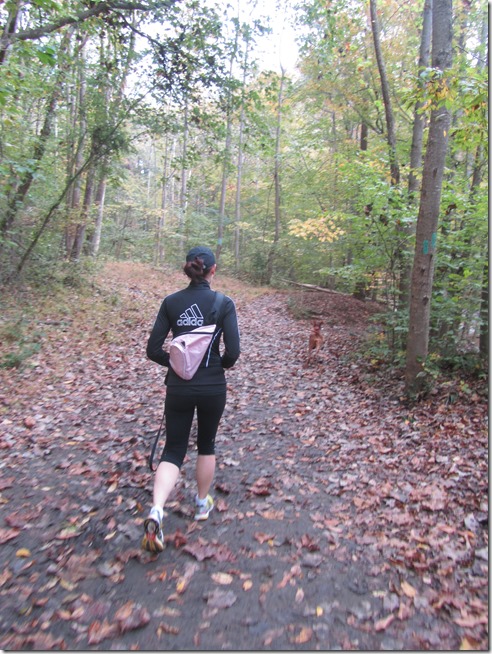 After our hike, Melissa and I stopped by my one DC request of the weekend. The film nerd in me had to see the Exorcist Stairs.

Yeah, they’re just stairs but it still made me ridiculously happy (and tired) to run up them. See? I’m easy to entertain. Just show me some stairs and make sure I don’t wear capris to a concert. Close to the stop of the stairs is the bar that was used in the movie St. Elmo’s Fire, so I nerded out on that for a minute or two and then we headed back home.

I’d love to tell you about Saturday night, but we didn’t take any pictures. Very unlike me. The night included about three different bars and way too many drinks. I’m sure it was a good time from my Foursquare check-in.

So that was the rest of my weekend in DC. The visit was too short but it’s nice to get away for a little bit and forget about work and being an adult. 🙂

I hope you all have a safe Halloween! Did anyone dress up at work today?