Yesterday, Michelle and I were lucky enough to be invited to race Challenge Nation Orlando.

Challenge Nation is a scavenger hunt race where you have to complete 11 out of 12 clues by finding the clue and taking a picture with it according to the instructions. I’ve never done a race like this, but I really liked that the clues were tailored to the area and what was going on in downtown Orlando that day.

The race started at Wall Street Plaza. We got there in the middle of packet pick up and even so, there was no line and we got our bibs and t-shirts easily.

We waited around for awhile with our friends, Cheyanne and Ricky, who were also running the race. We were on separate teams but we ended up running the whole thing together and helping each other with the clues and took each others pictures.

Speaking of clues, if you like the Challenge Nation Facebook page, they post hints to a few of the clues the night before the race. Maybe we’re just dense, but the hints did not help AT ALL.

Even after completing the race, I still only get two of them.

Anyway, eventually we lined up to receive our clues just before the race started. 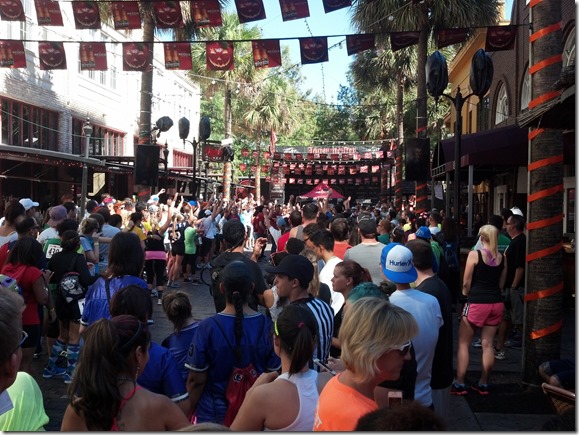 Each team had a captain that was responsible for getting the clues and getting the pictures verified at the end of the race. That was Michelle because she was willing and I was lazy. Such a trooper.

Michelle is holding out our paper with the clues to prove we weren’t opening them early. Finally, the race started and we were able to check out our clues, which basically meant we read about 5 of them and headed in their general direction and hoped for the best. Here are the 11 we completed:

1. Snap a pic with at least one teammate standing in a fountain or lake.

2. Find the Disney-donated spot and another challenge team and pose like rock stars. 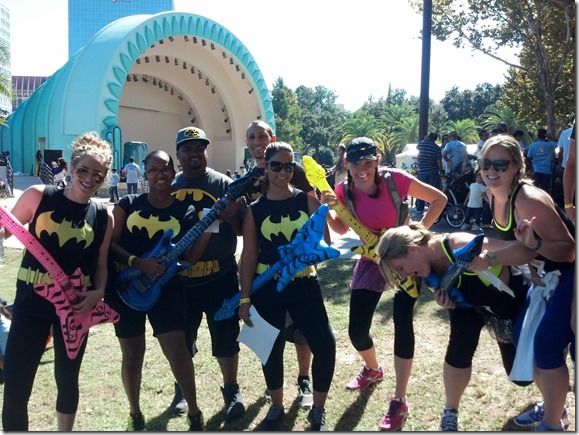 3. Take a photo with one of the following: a clown, a traditional barber pole, a tricycle, a person wearing overalls, or any live pet animal other than a dog. Give a thumbs up in the picture.

This is the part where I have to admit we spotted the bunny and asked for a picture before we knew it was a clue. The lady was like, “it doesn’t count if your thumbs aren’t up.”  See? My love of bunnies paid off TEN FOLD.

4. Re-enact a wedding ceremony at a romantic spot along the waterfront. Include at least 2 strangers and a physical creative prop as part of your ceremony (we had a flower). 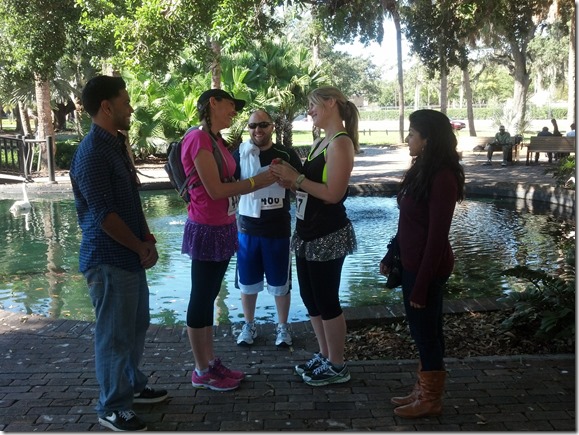 5. Pose like fearsome pirates near a bust of Mahatma and force one of your teammates to “walk the plank.” 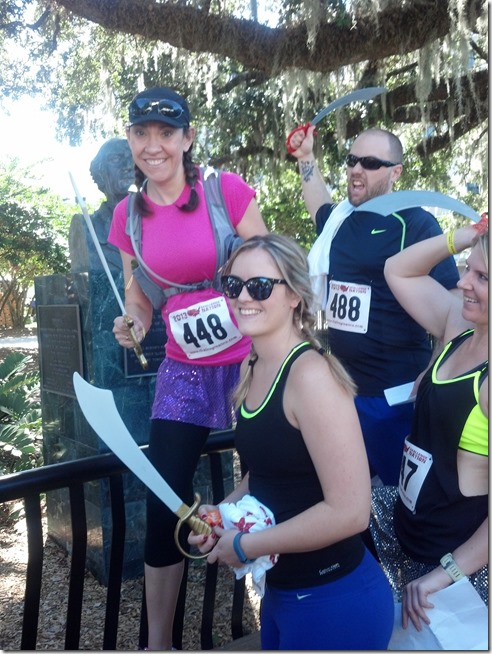 Apparently Ricky and I are the only one that got the “fearsome” pirates memo.

6. Take a photo with any of the presidents that appear on Mount Rushmore. (You can’t use currency, change, smartphone pictures, or draw the image.) 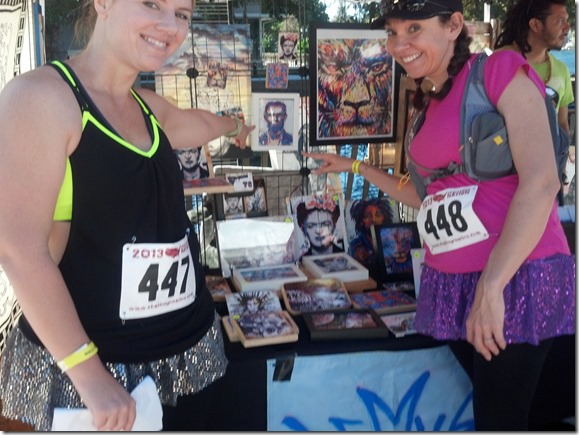 7. Find an out-of-towner (not from Florida) wearing non-sports related garb.

I just realized that guy looks like Chuck Norris. We should have gotten extra points for that.

8. Find the artwork paid for by Universal Studios and “do the obvious” activity with the rings in front of it.

That’s also how we look when dancing.

9. Buy/find a postcard, address it to someone on the team, write your favorite clue on it, and pretend to mail in any old style blue mailbox.

Our picture was super blurry so I won’t post that one. Michelle told me I had to write her a note on the postcard, so I did.

That was not part of the instructions and Challenge Nation collected those. Thanks, M.

On a side note, they do say that you don’t need anything for the race except a digital camera. We needed money to buy the postcard. I have no idea where you would “find” one and you are able to skip one clue, but I think having anything for purchase in the clues is a bad idea.

10. Find the building that was blown up in Lethal Weapon 3 (that’s City Hall) and then mimic the pose with the soccer player out front.

11. Find a certain intersection (we had to Google the clues to figure out the intersection) and draw your favorite thing about living in Florida with the chalk at that intersection.

Those are two people running. Most people drew the sun or water. *snore*

We came in 68 out of 178 teams. (Our team name was Fleetwood Mac Sex Pants ( <— name that reference), but Michelle doesn’t know how to write.)

I want to thank Challenge Nation for giving me the opportunity to run this race. I’ve never done anything like it and I loved it. It was silly and a lot of fun. Even Michelle, the Grinch of all “novelty” races, liked it.

I’ll definitely do this one next year and I might try to sweet talk the hubby into joining because I think he’ll like this one too.