The Beginning of the Food

So, a few of you commented on my last post that you couldn’t wait to hear about all the food I’ll be inhaling while in Texas. I just wanted to thank you for remembering that I have no self control. That means a lot. So far, I’ve been a good girl. The only bad thing I’ve eaten is one giant double chocolate muffin from the hotel breakfast bar. 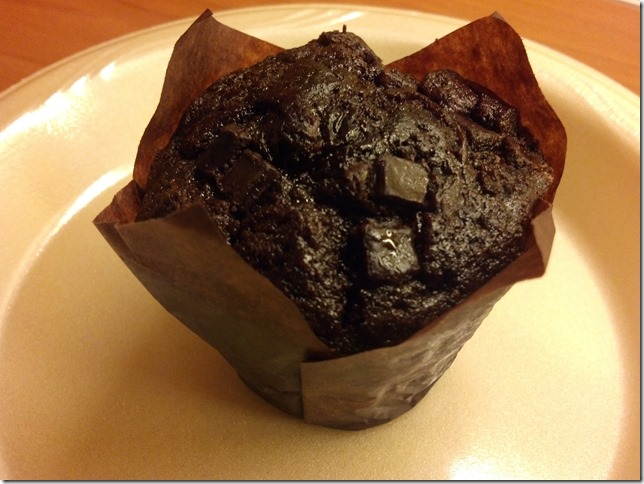 Ok. Not that one. That’s the second one and I swear I just got it for the picture.

It’s taken all my will power not to get one of those every morning, because OMG. Just, OMG. That’s all I can say. Also, for those of you thinking, “one muffin for breakfast isn’t bad,” just know that I already had breakfast. Then I ate the muffin.

I don’t want to leave anyone disappointed in my eating adventures, so I should mention that the day before I left, my in-laws took me out for a (very belated) birthday lunch at Hash House a Go-Go.

I’ve had my eye on this place for awhile since I always hear about the locations in Vegas and San Diego from others. Once I heard one opened in Orlando, I knew what I had to do. Then, when I saw this on the menu, I was pretty sure it was fate. 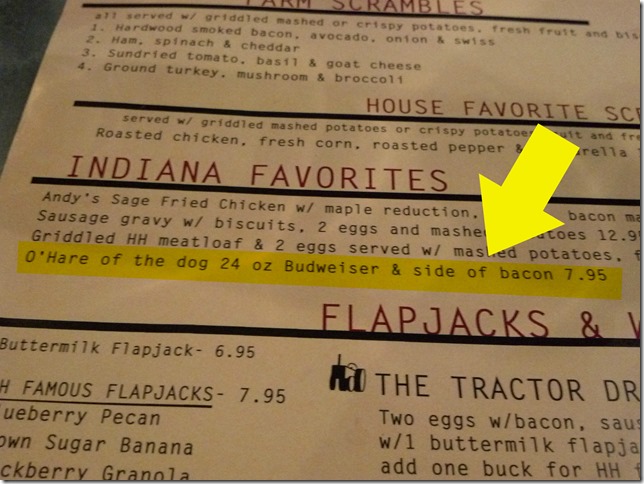 I didn’t get that only because I pretty much have that every morning.

The portions are ridiculously huge and we seemed to choose the smaller plates compared to what we were seeing served around us. I got the a corned beef sandwich with Swiss (the only time I will go near Swiss cheese is if it’s on top of corned beef) on rye but a rye bread that’s more like Texas toast. < — oh hey! Preparation for Texas? Plus, it had a weed growing in the middle of it!

It was delicious but the bread could have used less butter and the sandwich could have used more mustard. The fries were amazing. Really, really good. I love me some crispy fries. If they aren’t crispy, they get the Fry Thumbs Down (FTD) from me (aka, Wendy’s and Five Guys = FTD).

Hubs and the MIL both got the same grilled chicken and brie sandwich, which looked normal in comparison to my FIL’s hammered pork sandwich.

I don’t even know what to say about that thing. My FIL didn’t even make it to the bread and he had leftovers for the first time in his life. (Not joking. The man is a champ at clearing his plate. That’s probably where I inherited it from.)

We all left feeling so full and disgusting. None of us could eat another bite. But, we did anyway at a Brazilian bakery down the street. I’m not a fan of pastries. Brazilian desserts are very pastry heavy and weird (but your waxes are cool, I hear, so at least you have that). I like normal stuff like frozen yogurt and cupcakes. So, it was an interesting dessert experience.

My MIL had a piece of peach/mango cake that would have been delicious if it wasn’t for my hatred of mango. My FIL had some mini-bundt cake thick gelatiny orange looking thing that I couldn’t bring myself to try.

I had what can only be described as a “chewy condensed milk ball thing covered in rainbow sprinkles.” No clue what it was called, so I hope you are visually enraptured by that description. It was good, but not something I would get again. Hubs had some giant coconut cluster that was so sweet, it hurt my teeth to chew. So obviously I liked that one the best and ate it for him. I didn’t get a picture of any of the desserts because even mediocre desserts are inhaled too fast to be captured by modern photography.

I found out yesterday that my co-worker’s favorite sandwich is peanut butter and spinach. (wtf?) My other co-worker then said he used to eat banana and mayonnaise on Wonder bread as a kid. (Just, no.) I am learning things I’d rather not know on this trip.

Which sandwich would you rather eat? (You have to pick one. Don’t be a baby. I’m going with spinach and PB.)

22 responses to “The Beginning of the Food”