I’m going to talk about boobs some more. You are not safe yet. You may never be safe actually. Think of this as a nice break from race season poop talk.

1.  One of the things I was dreading most about the new ladies is that I knew I would have to sleep on my back for the six weeks of recovery. I’m a 100% all the time stomach sleeper. I never sleep another way. Not on my back. Not on my side. Just, no. Let me say how miserable sleeping is now. My second favorite thing in the world (the first being eating) has been ruined. I’ve never been so uncomfortable. Couple that with some insomnia last night and I was doing dishes and laundry at 4:45 in the morning.

After the first week of recovery, I was released to sleep on my side. Sleeping on my side is fine for an hour until I wake up thinking I’m having a stroke because my shoulder down to my hand and upper right side of my torso is numb. How the hell do people sleep on their side? I have no idea. So every night, I toss and turn (without the turning part) until I finally fall asleep only to wake up shortly after because I’m so uncomfortable.

2.  I finished Deadwood (loved it) and now I’m catching up on season 2 of House of Lies.

I’m loving it even more than last season and not just because my lovah, Kristen Bell, is in it. I feel like the things that annoyed me about the first part of season 1 are gone and the story is getting even better. Season 2 is worth it just for the Matt Damon episode alone. Also, it helps that KB looks exceptionally smokin’ this season.

3. I started Orange is the new Black yesterday on Netflix. 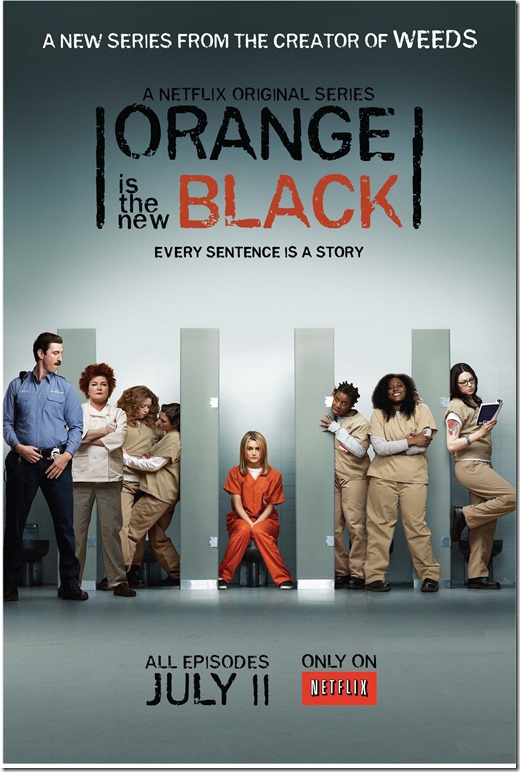 I’ve been really looking forward to this one because it’s from Jenji Kohan, who created Weeds, and I looove Weeds. So far I’m two episodes in and I’m really liking it. I asked hubs if he wanted to watch this one with me and he told me to go ahead and watch it on my own. Then, he ended up watching the second episode with me and declared that I could no longer watch it without him. So, that says something. Also, I’m secretly super excited when I can get him to watch new shows because he almost always says no.

4. I’m back at Crossfit three times a week and on Wednesday, I used my arms for the first time in a month (still no chest exercises for two weeks, though).

I’m not able to lift over 10lbs right now, so I used 5lb dumb bells for the lateral raises and 10lbs for the bicep curls. I was seriously wiped out after this workout. Hubs went on to do a 5th set while I just watched. Today, I’m sore. Everywhere. Do not underestimate light weight and high reps, my friends. I’m supposed to go to Crossfit tonight but I’m not sure what’s left to work out on me that isn’t already in pain.

5. Remember that work trip to Maryland that I was supposed to go on? Well, that was cancelled. Guess where I’m going instead?

It’s like Texas doesn’t want to let me go. I’m leaving Sunday and I’ll be there for (wait for it) another two weeks. At least I’ll be reunited with Whataburger, Freebirds, Chedddars, and this girl once again. I’ll also be reunited with 107 degree temperatures. Not as excited about that part.

Have a great weekend and I’ll talk to you all next week from Killeen.

Tagged as Five for Friday, House of Lies, Orange is the new Black, Texas, work

21 responses to “Five for Friday”