Fredericksburg Wildflower 10k and then some

The Fredericksburg Wildflower 10k is a small race in (wait for it) Fredericksburg, TX. My co-worker, Marisa, found this race when we learned we’d be on work travel for three weeks and it took her all of two seconds to convince me to do it. I’m a sucker for an out-of-town race.

Fredericksburg is a two hour and 15 minute drive from Killeen so Marisa and I left around 5:15am to get there for the 8:30am race. We got there with no problem. The entire route might have been three left turns total and we parked so close to the start that I was worried we were in the wrong place. Like, it was too easy. We picked up our bibs and t-shirts (Neither of us got that jelly by the way. Sad day.) and dropped our t-shirts off at the car. Then we had about 45 minutes to kill, so we walked around and posed with things.

We really wanted to pretend we were smoking that peace pipe but a ton of people were walking around the area and we didn’t want to look like total a-holes. Next time.

I informed Marisa that running a race with me is equivalent to agreeing to be on my blog, so I told her to assume the position and start posing. 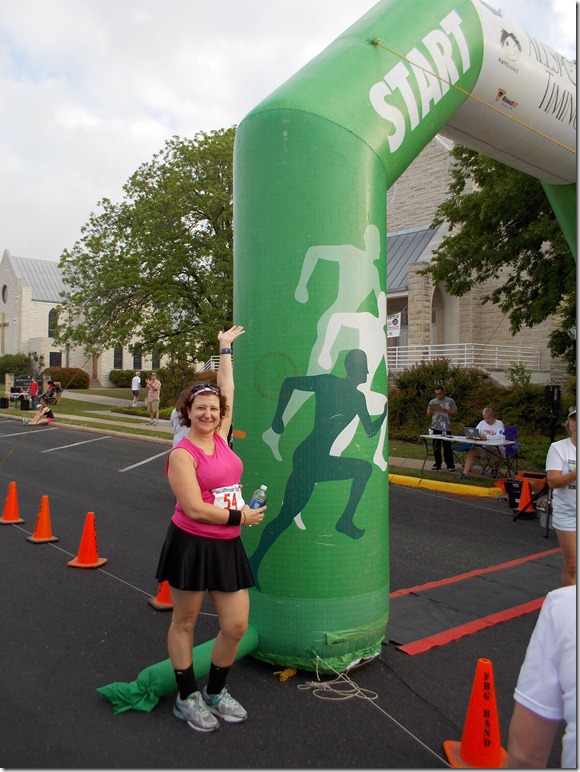 Such a good sport.

About 15 minutes before the race, a full-on Jane Fonda-like choreographed warm-up happened. 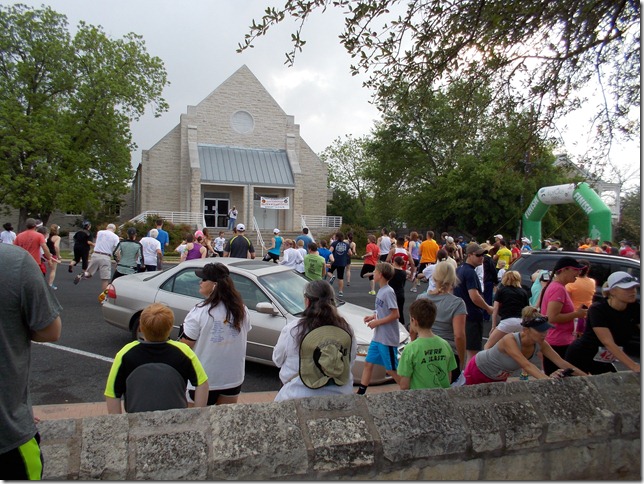 That was a first. It was mesmerizing. I mean, it’s a cute idea. But also hilarious to watch.

I love that runners understand the need for mass quantities of pictures. Whenever I’m taking a selfie, someone always offers to take the picture for me. Don’t mind if I do…

The race started with a few announcements: no bathrooms on course, runners in the front, walkers in the back, and there would be clearly marked with signs for the 5k and 10k. Famous last words.

Within the first mile, a bunch of runners turned around shouting that everyone for the 5k was going the wrong way. If you wanna hear the potty mouths of runners, just make them run the wrong direction in a race. For the love of my tender, virgin ears.

About 1/4 of the runners turned around and the rest kept going straight. I kept straight because the guy mentioned the 5k was going the wrong way and I was running the 10. But then we got to the end of the road and converged with a bunch of other runners so I knew it was the wrong way for the 10k too. By the time I passed the one mile marker, my Garmin was at 1.3 miles. EEEFFF.

I heard runners bitching about going an extra quarter mile the rest of the race. Here’s a picture of us all going the wrong way. 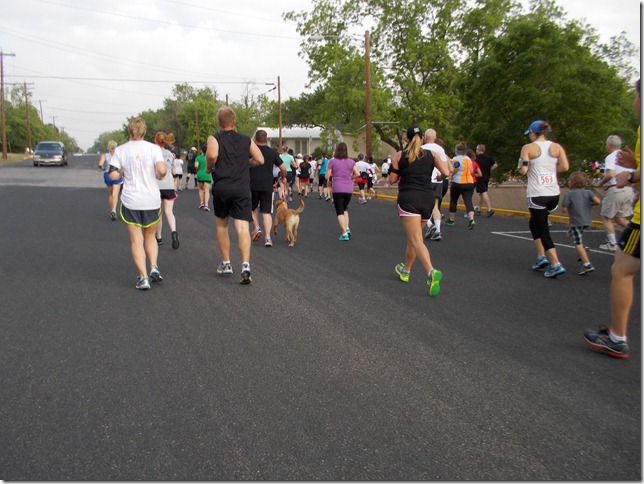 Yeah. There was a dog running the race. He kept whining and trying to jump up on his owner. He would only stop whining when the owner started walking. Basically just like I act during a race.

Anyway, after the wrong turn, any ideas I had to PR were gone. I was annoyed even though I didn’t think I would PR, but there’s always that little chance in the back of your mind that this will race be the one. So, I got over it and tried to enjoy the scenery.

I guess I had higher expectations for the course. It wasn’t particularly pretty for being in wine country, except for this part.

It was called the “wildflower” 10k and I saw two patches of wildflowers total.

The course may have not had a lot of wildflowers but they are all over TX right now, so we saw a ton of them on the ride home. So pretty.

We also got stuck in bumper-to-bumper traffic on the way home because of the Marble Falls triathlon. It’s all fun and games until you’re the one stuck in traffic.

Ok, back to the race. There were two water stops which was way too few for a hot race in Texas. I missed the first one at the 5k/10k split, I think around mile three. I saw the cups on the ground but no water table so maybe I just didn’t pay enough attention. The other one was somewhere around mile five. I’m so glad I carried a water bottle because I would have straight up died out there.

How do you get a race picture that looks like your running instead of walking because I have no clue.

Thanks to Marisa for waiting for me at the finish line to take pictures. In the 25 or so races that I’ve done, this is only the second time I’ve had someone wait to take pictures. Super cool of her too because I forgot to ask if she would mind being my photographer.

After the race, we hung around for a bit to see the awards but they couldn’t get the finish times printed, or on their Website fast enough, so they cancelled it and told everyone they would just mail the awards. There were lots of disappointed/pissed off people.

Overall, the race was ok. The course SNAFU really sucked but it only cost $20 to run and it was still fun to see a new place. Fredericksburg was smaller and less exciting that I thought it would be, but it’s a cute town so I’m glad I visited.

I still had a good time, had a great lunch, and was able to eat my weight in cake and cookies afterwards.

18 responses to “Fredericksburg Wildflower 10k and then some”