The Color Me Rad that Almost Wasn't

This morning, hubs and I ran Color Me Rad. 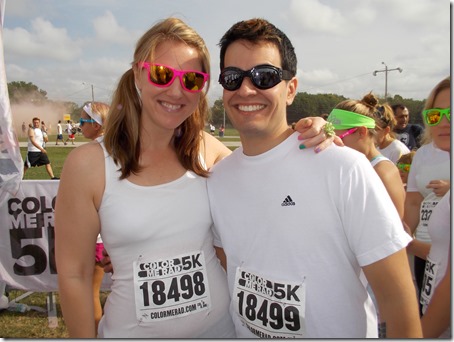 But let’s back up for a second.

Neither of us really wanted to do the race, but one of our friends from our old martial arts fitness class asked us to do it. We hadn’t seen her in so long that we said yes just so we could hang out with her for a bit.

Yesterday, she told us that her doctor recommended she not participate (she’s 6 months pregnant) so we were pretty bummed. We weren’t even sure we wanted to do the race anymore but since other people from our class were still going to be there, we sucked it up. 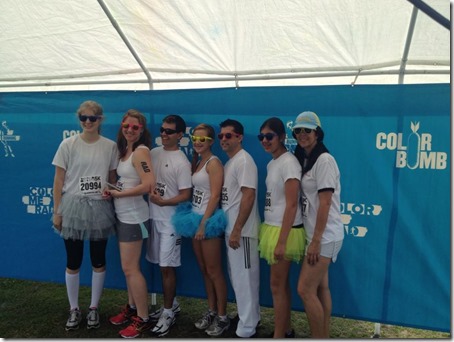 The race took place at the Central Florida Fairgrounds – about 20 minutes from our house. The Color Me Rad Website said that parking was available onsite from 7:00 – 8:00am and after that to park at either Valencia Community College or First Baptist Church to catch a shuttle. Since we didn’t leave the house until after 8:00am, we picked the closer parking at Valencia. We had no problem parking, but this was the line for the shuttle. 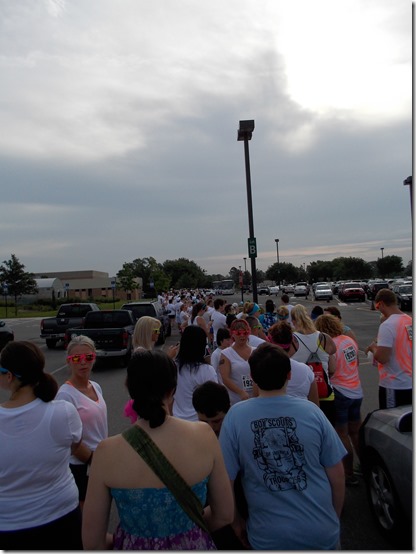 The Website also said the shuttles would be by every 10 minutes. Those two shuttles way up there were the only ones we saw in the 30 minutes we stood in line. 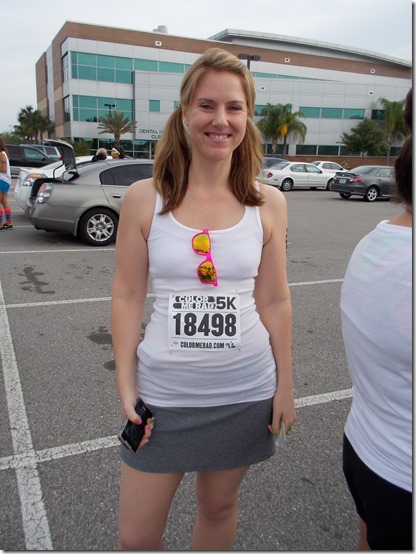 Just before 9:00am, someone from our group texted me that he parked onsite at the fairgrounds with no problem.

Oh? Those fairgrounds where the parking is supposed to be closed at 8:00am?

So hubs and I stood in line for the shuttle until we got more and more irritated that we made the executive decision to leave and try to park at the race site. We decided if parking was full by the time we got there, we would just go home because that shuttle line wasn’t worth it.

We got to the fairgrounds in about five minutes and parked with no problem. Our parking just happened to be next to some real bathrooms that were completely empty. Major score for a race with 5k runners. Plus we were happy that we wouldn’t have to deal with the shuttle after the race was over.

We found our friends and just made it to the start for our 9:30 wave time. 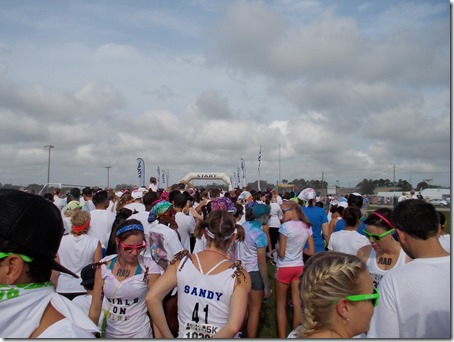 I guess that’s fine though because I don’t usually have a personal photographer with me, so I took advantage of that. 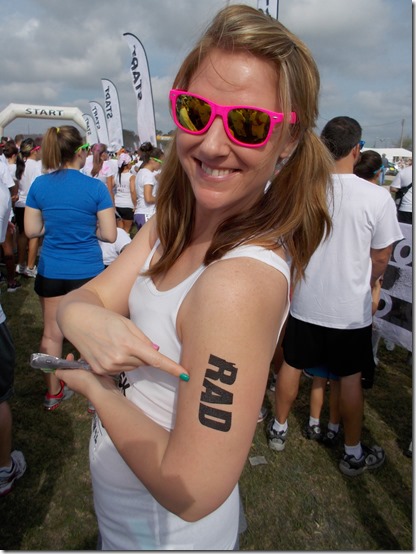 Plus, there were fun things to look at while we were waiting. 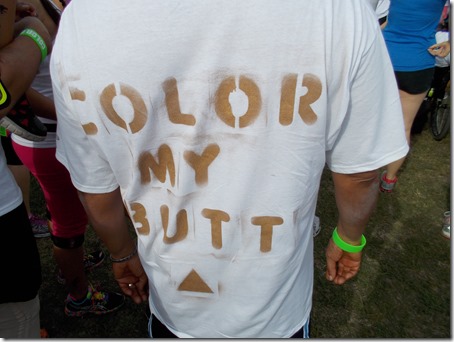 I really thought we’d be walking most of the race with a pregnant lady in tow, but since she couldn’t participate, the group ended up running the whole thing. Hubs LOVED that. He loves running. Just loves it. And by loves, I mean hates with every fiber of his being. 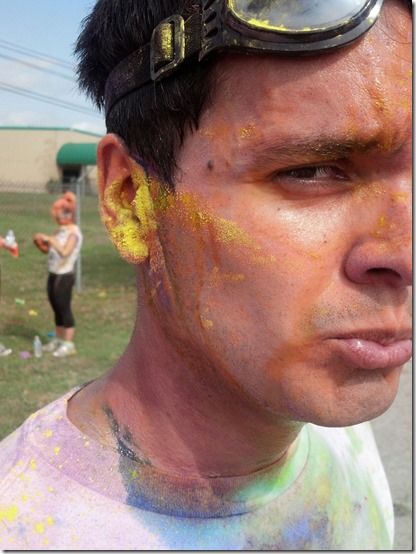 Poor baby ran 3 miles and got pelted with color.

The race was mostly on grass on a curvy path around the fairgrounds. There were four color stations – two of them were cornstarch powder and two of them were liquid (did not expect that). Plus there was one right at the finish shoot where they were handing out color bombs (plastic pouches of powdered color). There was such a haze of powder at the end, that I didn’t even notice the photographer until I almost ran him over. But I finished and now I can say I did a color run. 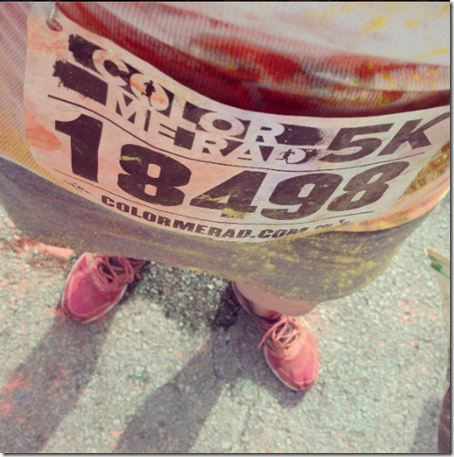 So while I loved seeing old friends, I think the race is a lot of hype. I much prefer obstacle races. I probably wouldn’t do another color run but I know others that thought it was the best time of their lives. Maybe this is just the grumpy, old woman in me talking. Next thing you know, I’ll be telling some teenager to pull up their pants.

I do have a few suggestions if you’re thinking of doing one:

1)  Know you’re running for fun. This is not a serious race. I would say half the people were walking. There are also a lot of people with strollers and little kids. So just be aware of that.

2)  The color stains. My stomach is still pink after a shower and hub’s neck is still purple.

3)  Bring a Ziploc bag for your phone/camera if you’re going to carry one.

4)  Run it with a bunch of friends. The more the better. I think I would have hated this race if I wasn’t running with a bigger group like I was. The friends make the race. 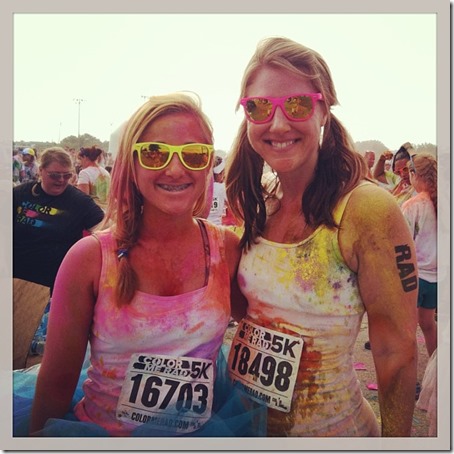 That’s cutie pie, Sara, from my group. She let me steal this from her Instagram. 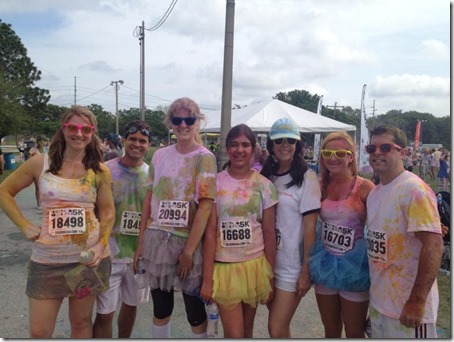 I came. I saw. Now I’ll go back to half marathons.

17 responses to “The Color Me Rad that Almost Wasn't”