That Weekend When I Moped

Thursday, I started coming down with a nasty cold. I would say that within four hours, it went from a sore throat to a full-on congested, coughing, sneeze-fest. It should be noted that Thursday was also my last day of antibiotics for a sinus infection. In case you were wondering if you can get sick while on antibiotics…

I know. I’m amazing like that. So basically, I’ve been miserable all weekend and have stayed awake long enough only to 1) mope 2) complain about how miserable I am and 3) check the Veronica Mars kickstarter page.  < —- obsessed

Ok, I did one other thing. Hubs and I had tickets to MegaCon on Saturday (we also went last year). I love going for the celebrities but walking around for five hours takes it’s toll when you’re on your deathbed. I wore my Garmin because I was curious how far we walk whenever we do go, but it lost satellites inside the convention center. That dang Fitbit pedometer would have come in handy then. Although, my Garmin did register 2.5 miles just for the walk to the car and back, so that’s something.

While we were there, we got to meet Michael Hogan, which was really cool. 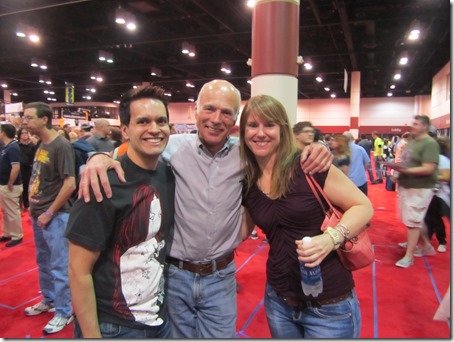 If you know who Michael Hogan is without looking him up,  your Geek Card has been renewed for another year!

Then yesterday, I almost didn’t feel well enough to go for my metabolic testing but I really hate rescheduling appointments. So I went and it was…interesting, I guess. But that’s a whole ‘nuther long post, so I’ll tell you all about that when I’m back to feeling like my normal, sassy self.

9 responses to “That Weekend When I Moped”