I mentioned all the wrong things I did before my race, but somehow it still went well. It just goes to show that you can do everything right or everything wrong and it just comes down to the luck of the draw on race day. But, I thought that I must have done some things right in there somewhere. So, I’ve been trying to figure out exactly what those were and this is what I came up with:

I normally try to eat low carb and I never carb load before a race. I’m a chicken breast, salad, and veggies kinda girl. That’s also what I’ll eat before a race because it’s normal for me. There have been times when I’ve eaten outside the norm and ended up in three port-o-potties, so I try to avoid it. This time it was a free-for-all of burgers, fries, and cookies – way more than I normally eat. I think this worked because I ate my big meal of the day for lunch instead of dinner. < — lots of time to digest

Alright, I’m going to give away my trade secret. I never have hangovers when I drink alcohol because I always drink one (big) glass of water for every drink I have. It always works. I tried to do that Friday night but the fun took over and it didn’t work out so well, so I knew I needed to make up for it on Saturday. Once I woke up, I started chugging water. I refilled my 16.9 oz bottle eight times and that doesn’t include the big water I had with lunch, a 32 oz unsweetened tea, and a can of sparkling water. So, I made sure I was hydrating all day. 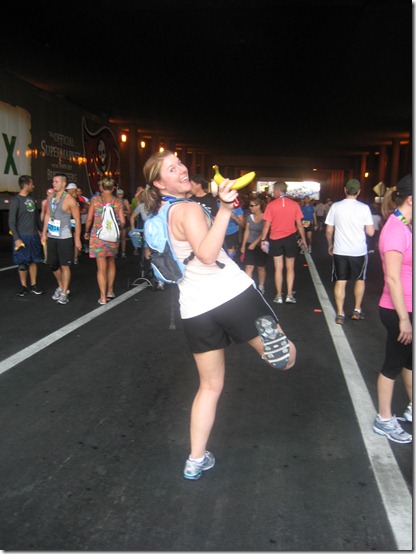 I know Camelbaks aren’t for everyone and some people like to hold water bottles instead, but this is what works for me because I hate running with anything in my hand and there are never enough water stops during a race. I stopped wearing my Camelbak over a year ago because I thought it was responsible for my shoulder pain. Turns out that I had an inflammation and it wasn’t the Camelbak afterall. So I filled it up with half water and half Powerade Zero and sipped on it throughout the race. Then I used the water stops as an additional reminder to drink more.

4. I did light workouts the week of the race.

Alright, this should be a no-brainer. But when I looked back at my Daily Mile for last week’s race, I had done six workouts. While I normally work out that often, that week included two hard Crossfit workouts and speedwork on Friday. So, no wonder I was ass-tired on Sunday during that race.

Before 3M, I worked out Monday (Crossfit), Tuesday (2 easy miles), and Thursday (5 easy miles). I even cancelled my Wednesday Crossfit workout just to make sure I wasn’t going to be sore in any way. The rest of the week was spent on the couch, including most of the day before the race.

5. The weather was perfect.

My runs are always better in cold, overcast weather. I breathe better, sweat doesn’t drip into my eyes, and it puts me in a good mood. I would rather freeze my ass off in a race than be hot any day.

So there you have it. Some things actually did work in my favor and I’ll definitely try to repeat them next time around.

10 responses to “What Went Right”