In present time, hottie Dylan McDermott is back for a little season 2 action. He meets with an addiction therapist to help with his aversion to skinning cats, which turned into an aversion to skinning women.  Turns out he learned all his skillz from his father, Bloody Face, and he’s taking over the family biz. 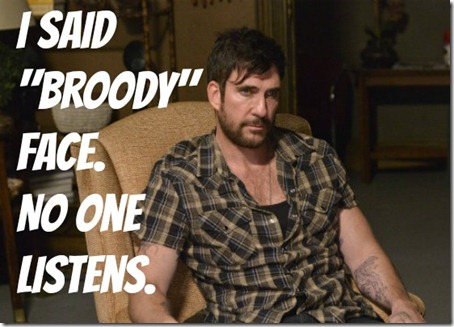 Then we get a flash of him standing over Maroon 5’s wife when she’s tied up on the table. So now we know who was making the calls to the police from the asylum.

Lana gets up to leave but ends up passing out.

Sister Jude wakes up tied to a bed in the asylum.

The authorities think she’s unstable and commit her now that she attacked Santa and because Sister Mary Eunice, Santa, and Dr. Arden have set her up as the murderer of the guard that killed Grace.

She tells the Monsignor she’s being set up but he doesn’t believe her. So he does the only normal thing he can do –  he brings Santa into her room so he can forgive her.

Then he plants one on her forehead and she is all OMG WTF BBQ.

Sister Mary Eunice meets with the Monsignor and tells him she knows about how he wants to be Pope. He’s annoyed that she knows his “secret” at first but then seems ok with the fact that she offers to help him get there.

Lana isn’t passed out anymore. I have no idea why she passed out in the first place. Maybe I’m just super unobservant. Anyway,  she steals a coat hanger from one the maid’s uniforms hanging in the kitchen.

Then Lana visits Kit. (They just let her walk around no problem now?) She wants to kill Dr. Thredson but Kit needs him to talk first. So they come up with a plan and it goes something like this.

She threatens to use the coat hanger to abort the baby unless he tells her the truth about some things. She wants to know why he killed several of the women. Including her teacher lover.

Once he tells her, we see Kit in the background recording the confession. Oh snap! And then she’s all, “j/k already got rid of the baby.” Double snap!

Speaking of getting rid of the baby, this was disturbing.

Also, really? So she’s just walking around without an infection or wound of some sort after losing all that blood from sticking a coat hanger up in there? Sometimes, I take a good poop and can’t walk for a day. But I digress.

Dr. Arden inspects the area where Grace was taken by the alien. Then he finds Kit and tells him they need to talk. He’s an alien believer and he thinks their coming has something to do with Kit. Both women he had sex with (his wife and Grace) were taken shortly after. Dr. Arden thinks Kit is their experiment.

So, Dr. Arden brings up an awesome idea to Kit. He thinks if he brings Kit to the verge of death, the aliens will show up and he can make contact with them. Dr. Arden assures Kit that he will bring him back to life at the last minute. 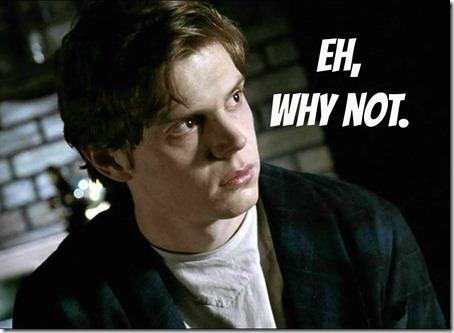 After Santa’s apology to Sister Jude, the Monsignor thinks he can convert him into a good man and look like Captain Awesome to the Catholic Church and get closer to getting Popey with it. The Monsignor absolves Santa of his sins and baptizes him only to have Santa try to drown the him in the baptismal pool.

Back in the present time, the addiction therapist’s next patient shows up at the office to find her dead in her chair.

And Dylan McDermott waiting behind her.

Sister Jude is released into the common room of the asylum and sees Lana sitting  at one of the tables. She apologizes to her for everything she’s done and promises she will get her out of the asylum. Lana is all, “heard that one before, prove it ho.” So Sister Jude broke the record that plays endlessly in the common room. The one she would never let anyone turn off. I guess that is how people prove stuff in 1964. Gotta go with what you got I suppose.

Dr. Arden is ready to almost kill Kit. He slams an injection needle into Kit’s chest and just as Kit dies, the bright alien lights start flickering. Instead of saving Kit like he promised, he walks toward the light and into one of the rooms where he sees Pepper (who’s been missing since movie night).

Pepper must have been off with her Rosetta Stone because she is really well spoken now unlike the last time we saw her. She tells Dr. Arden that “she’s almost ready.” When Pepper moves to the side, we see Grace – alive and extremely pregnant. Oh, and neked.

In the last scene, we see the Monsignor hanging from a cross as the angel of death walks into the room.

I think they spent so much of this episode trying to convince us that Dylan McDermott is the son of Bloody Face that it seems like a diversion. I think he’s Kit’s alien baby.

Also, do you think Pepper was made “smart” by the aliens or do you think she was just faking it all along and working with them?