The Rest of NOLA

Alright, so back to the New Orleans thing. I ended the last post with our second night out on the town. 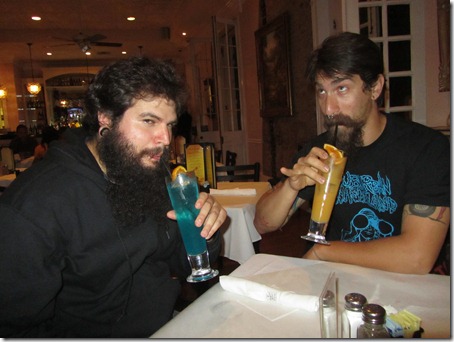 After dinner, most of our group met up at the courthouse for a truly horrible two hour walking ghost tour. 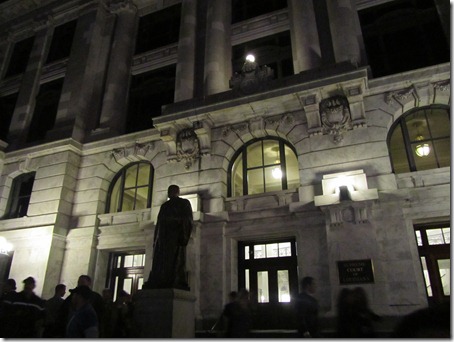 The tour had about 25 people. We walked around and made stops where our guide told us stories about ghost sightings in certain buildings. 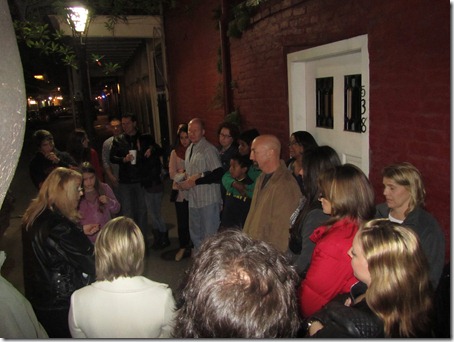 We did not go into the buildings. We just saw them from across the street. Then, she would show us where certain sightings happened and told us to take a picture of the area, and we might see a ghost in our picture…once we uploaded them to our computers.

I would highly recommend avoiding a ghost tour in New Orleans. Watching that $20 swirl down the toilet might be more fun.

After our tour, we were more than ready to get a drink. Or ten. So we headed over to The Dungeon where we stayed all night. No pictures are allowed in The Dungeon, but I snapped this one of Nate just outside. 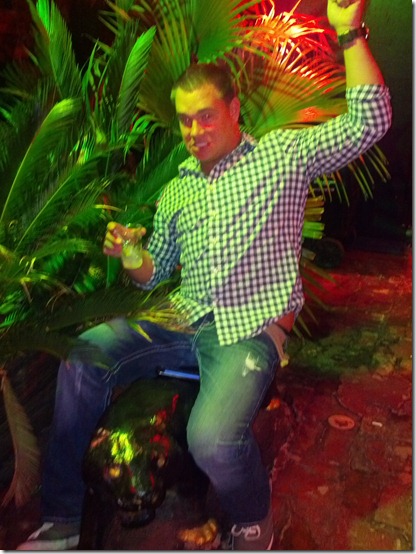 “Yep, it’s made with bits of real panther, so you know it’s good.”

The next morning, hubs and I were on our own for awhile, so we booked a walking cemetery tour of the St. Louis Cemetery One. 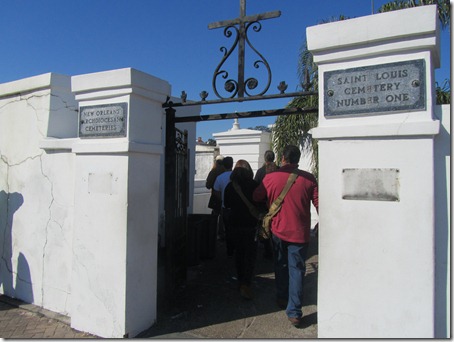 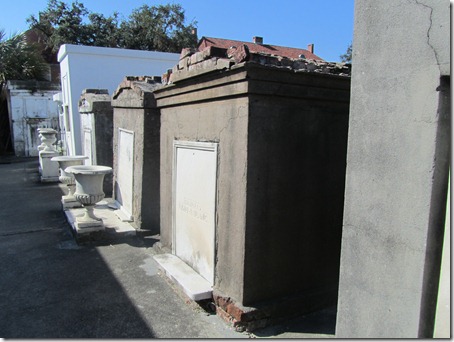 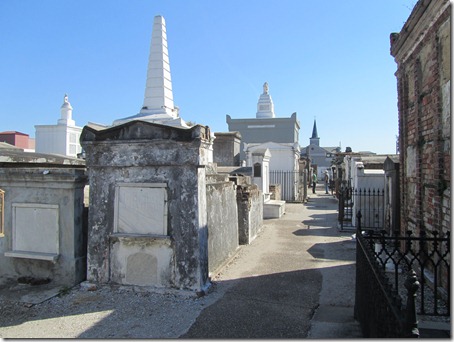 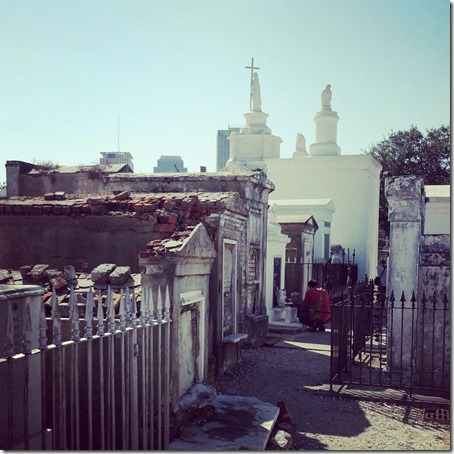 I love that the city is fun but also has a ton of history. Our tour guide was super knowledgeable about the history of New Orleans, so we learned a lot of interesting things.

This is the grave of Marie Laveau, a Voodoo priestess. According to our tour guide, it’s the second most visited grave in the world (next to Elvis). 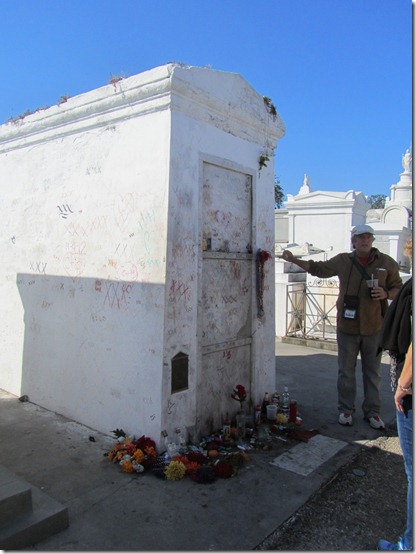 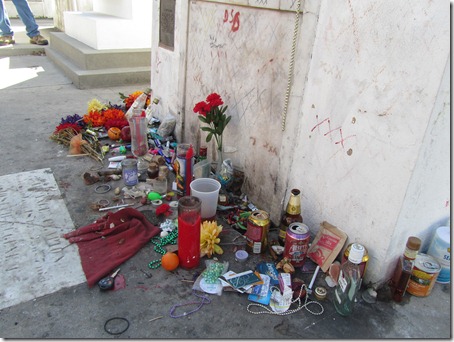 If it is the second most visited grave, my guess is because the traffic is so high in this cemetery and not because people want to see her grave.

Visitors often mark three X’s on her grave, spin around three times, and leave an offering to get a wish granted. I asked why so many people left lip gloss (there was tons of it) and my answer from the tour guide: she was a hairdresser.

St. Louis Cemetery One is still active, meaning people are still buried there. If a grave is left unattended for 50 years, the church has the right to re-sell it. So I found this fixer-upper if any of you are interested. 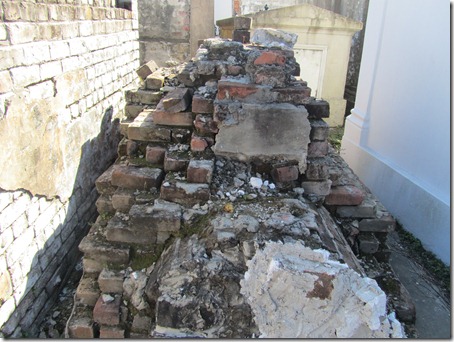 Other things we learned about the city in general:

After our tour, we met up with Jamie, Ken, and Nate for lunch. I stuffed myself with a Po-boy and pecan pie and then still insisted we get more beignets afterwards. I wasn’t hungry at all but thought as long as I was in New Orleans, I was gonna shove food in my face.

On the way, we found cop cat. 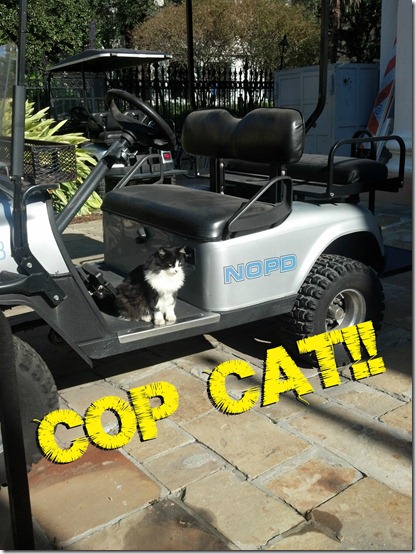 Once we got to Café Beignet, we knew we’d been followed. 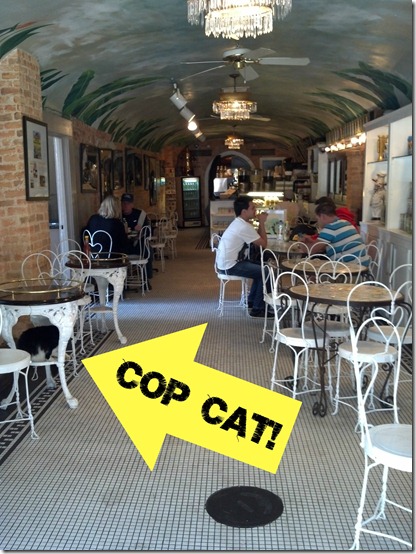 Seriously, that freaked me out. Everyone else was like, “oh hey, there’s cop cat. *nom nom*”

I ate three beignets. One when I bought them and two for dinner. I am certain if I lived in NOLA, it would be the death of me.

We were all so full, we waddled back to the hotel to pick up the rest of our group and headed to the airport. I’m pretty sure that’s where hubs picked up the flu and then gave it to me for an early Christmas present.

My DVR didn’t record American Horror Story last week, which is why there was no recap. Once it shows up on demand, I’ll get caught up. (Not that anyone asked.)

12 responses to “The Rest of NOLA”