Episode 2 starts off right where episode 1 ended, in the present time asylum with Mrs. Channing Tatum running from Bloody Face (or at least I think that’s Bloody Face). She tries to save her hubby Maroon 5 but Bloody Face catches up too quickly so she locks herself in a cell and is forced to watch while Bloody Face repeatedly stabs Maroon 5.

We’re back to Lana’s teacher-lover. She super regrets committing Lana to the asylum and tells her friends she plans to get her out the next day.

Only, Bloody Face has different plans and kills her that night. (Proof that Bloody Face is not Kit and probably someone from the asylum since that’s definitely not a random killing.)

Back at the asylum, Sister Jude is doing inspections of all the patient’s rooms. Once she gets to Lana’s room, she finds notes that she’s been writing about what’s happening in the asylum and confiscates them. Lana assures Sister Jude that she has a good memory and doesn’t need her notes to write her story. Sister Jude convinces the doctor (a little too easily) to do electroshock therapy on Lana in hopes that it will erase her memories. 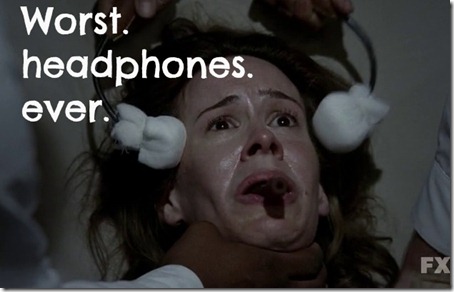 The doctor asks Sister Jude to assist during the procedure and afterwards she seems sympathetic about what’s happening. After the electroshock therapy, Lana still has her memories but they’re hazy and she has trouble remembering new things.

Lana tells Grace she knows about an escape tunnel and that they can escape together but she will only tell her where it is if they go together – without Kit. Grace tells Lana that she’s known killers and Kit is no killer, but Lana doesn’t believe her.

Later on, we find out that Shelley (Chloe Sevingy) was locked up for cheating on her already cheating husband, that she would do anything for five minutes in the sun, and that she hates being called a whore.

So far, I’m not seeing the point to her character. She’s like the Larry of season 2 and she annoys me. Kill her.

Anyway, we also find out more about the doctor and just how creeptastic he is. 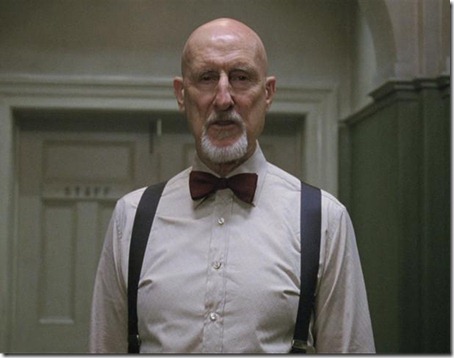 He knows all about the “creatures” outside and when Sister Mary Eunice asks about them, he says he will tell her about them in due time. In the meantime, he insists she should eat a yummy caramel apple!

He also likes to hire hookers, call vaginas “mossy banks,” and keep a stash of creepy pictures of tied up and mutilated women.

That’s Zachary Quinto, also from last season. Expect him to stay around forever since he gets top billing this time around.

Dr. Thredson knows there’s something wrong with how the asylum is being run and he confronts Sister Jude about it. She no likey and tries to blow him off with some idle threats. The threats don’t work and Dr. Thredson decides to butt into Sister Jude’s business while she’s meeting with a new man and woman that are seeking help for their teenage son.

Dr. Thredson suggests that adolescents often go through stages when they act out and that it’s normal, but the parents assured him that something weird was happening. The dad found him speaking some unknown language while eating the heart of his best farm animal with his hands.

Now we have a possession to add to the mix!

When Dr. Thredson evaluates the boy, he thinks that the boy needs to be medicated immediately but Sister Jude knows better. It’s exorcism time.

A priest, the monsignor, and the psychiatrist (that seems like the start of a joke) stage the exorcism. While preparing for it, the priest asks Sister Jude to leave the room because it’s “no place for a woman.” Sister Jude leaves and is not amused.

During the exorcism, the son does all the typical things one does while possessed and being exorcised. He talks in a devil voice, looks all nasty, and throws the priest against a wall with his super devil powers. He also shouts all sorts of truths in his scary devil voice, like how he’s glad he gave Dr. Thredson up.

Sister Jude comes back to visit the devil boy later on and he’s still in rare form. He pisses her off because he knows how she used to be a whore, slept with 53 men, and hit a little girl one night while she was driving home drunk.

All the while, we’re getting flashes of Sister Jude singing in a night club, hitting on Sailors, and hitting a little girl in blue with her car. Hmm. Seems like a good enough reason to become a surly nun. Sister Jude attacks the devil boy but the monsignor, the psychiatrist, and Sister Mary Eunice show up just in time to stop her.

Just then, the power goes out in the asylum and all the cell doors open up. As the patients are walking out of their cells, Lana realizes it’s a great time to escape and grabs Grace. Kit shows up just as they were leaving and Grace wants him to come along but Lana is all like, hell no he won’t go!

Grace refuses to leave without Kit so she and Kit leave Lana and try to find the way to the tunnel on their own. Lana is worried a killer will be back on the loose if Kit gets out, so she screams to the guards and destroys her own chance of escaping.

During this time, the possessed boy goes into cardiac arrest and the devil moves to Sister Mary Eunice’s body. She passes out and is taken to the infirmary to be treated by the doctor. When she wakes up, she looks infinitely hotter and the doctor is eyeing up her lovely lady lumps. Sister Mary Eunice inquires about the “creatures” outside again about but the doctor plays it off and tells her to get some rest.

At the end, we see Sister Jude planning to whip Kit and Grace with a cane for trying to escape. She lets Lana pick the cane she uses and watch as  “treat.” Just before the punishment begins, Kit confesses that the escape was all his idea and saves Grace from being punished. He takes her punishment for her: 40 lashes with a cane plus a mandatory butt shot.

What did you think of episode 2?

Do you hate Shelley as much as I do?