Saturday was a busy day. Before the race, hubs and I drove to Wekiva Island to belatedly celebrate Shelia’s birthday. (Remember, she ran the 10 miler with me that night?) Wekiva Island is about 45 minutes away from our house in the Apopka/Longwood area, also known as BFE. 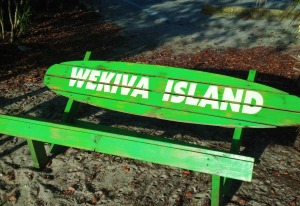 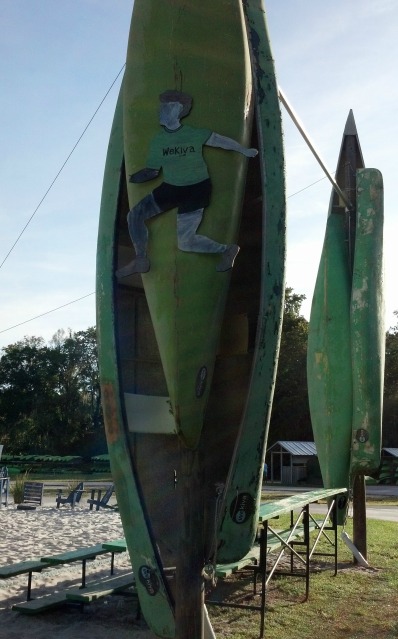 Our original outing was planned a month ago but canceled because of Hurricane Issac and race day was the only day everyone was available. So, it was a long day, but a really fun one.

Shelia found a Living Social deal with Central Florida Paddleboarding, bought a bunch of deals, and got a group of us together. Hubs and I arrived early and took a walk around. Wekiva Island is a really pretty area that has volleyball nets, cabanas, kayaking, fishing, and swimming and they host group events like birthdays too.

This is a huge Tiki bar that was open for business when we got there at 8:45 am. This is quickly becoming my favorite place ever.

Everyone arrived shortly after, we found our guide, and he gave us a bunch of tips before we got on our boards. Sheila was kind enough to tell me that the guide emphasized to her that you should not be afraid of gators to go on the excursion. Only, she told me five minutes before we got in the water. That was fun. Don’t gators take the tall, meaty ones first?

Besides the gators, the water did not look like something I wanted to fall into. I’ve never been paddleboarding before and I have zero balance, so I was pretty sure that I was going to take a nose dive.

It took me about 10 minutes to really feel balanced and comfortable. Ten, long, scary minutes. But then it felt like I had been doing it all along. I think it’s all about finding your center of gravity.

Unfortunately, there was only one close-up picture taken of me while I was out.

I think we were out for an hour and a half and it was so fun and easy once you get used to being on the board. We saw a bunch of turtles and two baby alligators (I was not interested in finding the mama). Our tour guide was really awesome and he even took a bunch of pictures of all of us while we were out there. 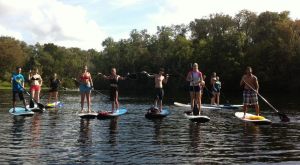 (Birthday girl Shelia is in the middle, hubs is on the left next to me.)

Once we got back to the wharf where we started, there were tons of people out sunbathing, drinking, and enjoying the weather. I have never seen so many people drinking during the daytime. I think this is an unexplored area that I need to research.

We all got lunch at the food truck there and hung out and chatted at the picnic tables for awhile. Before we left, Shelia tried to get us together for a group picture and at the last second, her husband, who was originally kneeling for the picture, stood up and pretended to throw us all in the lake.

I like how I’m the only one that really fell for that. Or maybe it was just his hand placement. Hey now! 😉

Overall, it was a really fun day that ended with a fun race.

Have you tried paddleboarding?

In a week, we’ll be celebrating another friend’s birthday by zip-lining. That should be interesting.

21 responses to “Paddleboarding at Wekiva Island”