This week has been busy. Really busy. Not only am I working my normal hours at work but I’m doing a lot of side work at home that’s sucking up most of my free time. With my nightly workouts and chores, that leaves me about 4 minutes to hang out with my husband and paint my nails or do something that will make me look like less of a troll. Here’s what’s been going on:

1.  I’m leaving for DC tomorrow and I have more things that need to get done before I leave than there are hours in the day. It’s totally stressing me out just thinking about the next 24 hours and I’m not sure how it will all get done. On top of that, I’m not even packed yet, which I would have done early if it weren’t for my “job” and “responsibilities” getting in the way.

2. I did a speed run on Tuesday night that was rather glorious. I didn’t want to do it because I was butt-tired (real word, look it up) from Crossfit the day before, but I’m not going to get faster just sitting on my ass. So I did 5 x 1200 @ 8:57. I upped the speed to 8:45 on the last set and realized there’s no way my poor, aging, black heart could take 5 sets at that pace. I still have some work to do if I want to kick my half marathon time’s ass.

3. I watched the first season of The United States of Tara.

It’s a show about a woman with multiple personality disorder and how the disorder effects her family. It’s really interesting and funny and kinda sad to think someone out there probably lives that way. I picked it from Netflix streaming because I wanted something on in the background while I worked and ended up really liking it. So I’ll watch the next two seasons soon. Has anyone else seen it?

John Corbett is in it and he’s way hotter in this show than he was in Sex and the City. But I’m pretty sure no dude would be that amazing and willing to deal with 17 years of Tara’s kind of crazy. 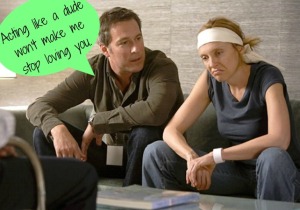 4. Today is bring your pet to work day at my work. This is my office mate.

That’s Bailey, the yellow lab of my desk mate, Justin (The one that got bunny-afied). Speaking of Justin, he left his desk the other day and forgot to lock his computer. So I took the opportunity to write “I love you, man” to one of our other co-workers from his instant messenger. Again, he loved that. 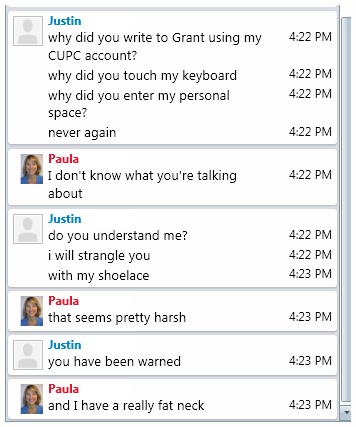 He told me he wasn’t going to get even for all the bunny decorations and the instant message until we are in Texas next month. He mentioned that he might hire a trans-sexual to come to my hotel room while we’re out there. I told him that I will look forward to that because I could use a shopping buddy.

Random question: Who’s watching SYTYCD? My favorite dancer so far is Cole but he went a little too long with that creepy nerd impression last night.

Tagged as Running, The United States of Tara

15 responses to “A Whole Lotta Lot”

Leave a Reply to Jessica @ Sushi and Sit-Ups Cancel reply