Nice Day for a White Wedding

So now for the real reason we hopped a plane to Reno: Don and Morgan’s wedding. After breakfast, a workout in the hotel gym (for me), some lunch, and a nap (for hubs), we took our yearly shower (not together) and made ourselves all purty.

The wedding was held at a special events center called The Grove.

The grounds were beautiful and set up was just being completed in the dining area once we arrived. Not many people had arrived once we got there, so we took a look around. You could see a lot of Morgan’s added touches to the place, like crystals hanging at the altar, a photo booth with a bunch of props to use in the pictures, and feather pins on the tables for guests to wear. 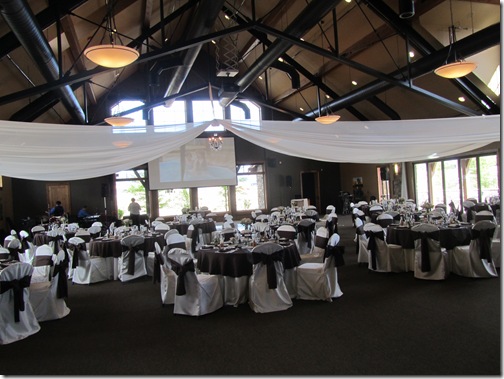 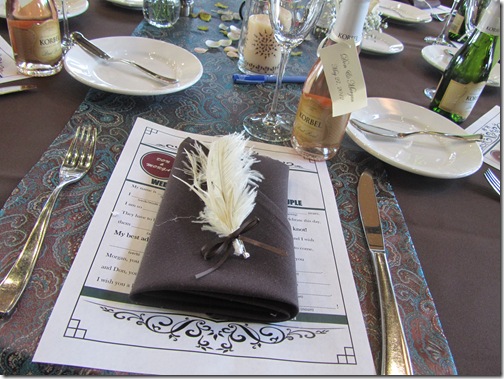 And one of my favorite and unique touches was the wedding mad libs for the bride and groom.

I regret not taking a picture of what I wrote on mine. There was something written about Morgan always dry cleaning Don’s assless chaps. I’m not too sure, I was a few drinks in.

After taking pictures like I was paparazzi at a Justin Beiber siting, guests started to arrive, including our friend Tyler who also flew in from Orlando for the weekend. (Tyler, hubs, Morgan, Don, and I all used to work together. Don scored a sweet job in Reno, so Morgan and Don moved out there a little over 3 years ago.)

The wedding was Edwardian/Neo Victorian themed.

From their wedding Web site:

Picture gentlemen in top hats, and ladies adorning themselves with a unique combination of the era’s fashion with a modern twist which might include an eclectic or miniature hat or head adornment, tailored riding coats / jackets or cropped bolero jacket.

I was surprised by how many guests actually dressed up and went all out with their costumes. It was really fun and different take on a traditional wedding. I wanted to get more pictures of the guests but I didn’t know a lot of them so I felt awkward.

The weather was absolutely beautiful and the ceremony was short and sweet. I don’t cry at weddings (I usually save that for bad commercials), but I may have shed a tear or two at Morgan’s vows. They were really sweet. 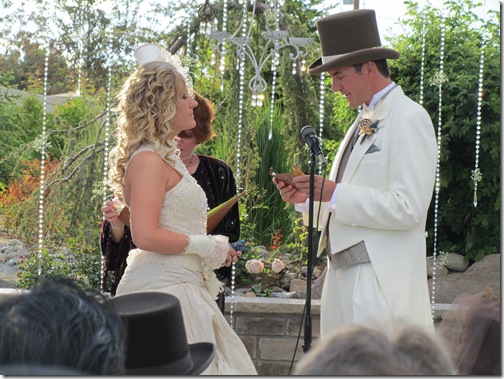 When they announced the bride’s new name for the first time, she got this huge grin on her face. So cute! And also my favorite picture of the 75 or so that I took. 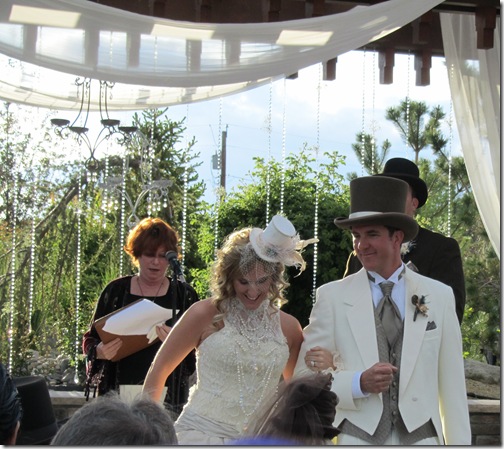 After the ceremony, the wedding party went off to take some formal pictures and hubs and I found our seats. 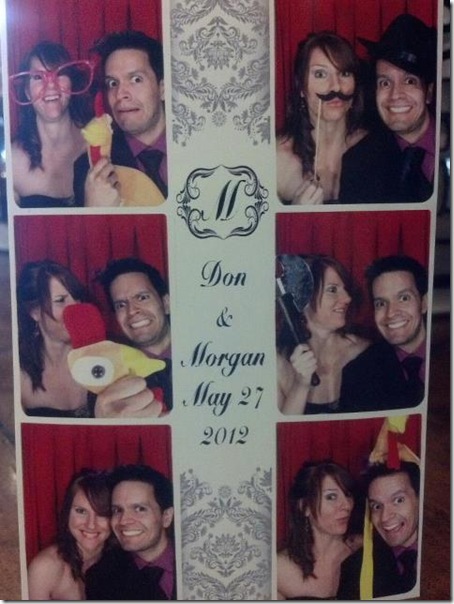 We enjoyed a really delicious buffet style dinner that included salad, mashed potatoes, veggies, salmon, and beef. I don’t like salmon but this salmon was amazing. It didn’t taste fishy at all. I ate everything on my plate like it was my job. 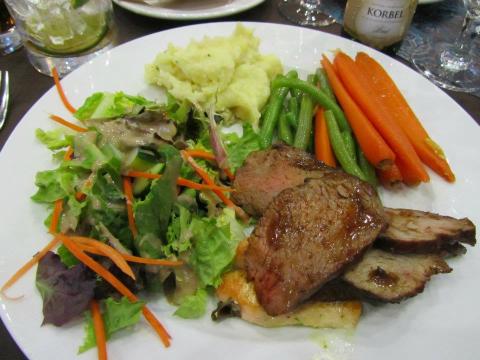 I love it when hubs wears a vest. Mmmm. *licks chops*

Sorry. Got distracted there.

After dinner, Morgan and Don had their first dance outside. A choreographed fire dance, of course.

Then a bunch of girls (including Morgan) from their fire dancing group, Controlled Burn, did a choreographed dance. Then the men followed with their own fire dance. They were all really fun to watch.

After all the dances, we went back inside for the traditional bride/father, groom/mother dances, then some belly dancers took the stage, and then a group of hula hoopers did a routine. This wedding had some serious entertainment.

After all the dances, it was cake time.

All the cakes were from Nothing Bundt Cakes. They didn’t look like anything fancy but holy crap they were amazing. So amazing, I tried 3 different flavors. Then I went for a 4th, but I was so full, I couldn’t do it.

Good thing I was not too full for more drinks. We joined the bride and groom at the bar for some shots while the rest of the guests packed out the dance floor.

The rest of the night, we hung out and chatted until it was time for the bride and groom to leave. 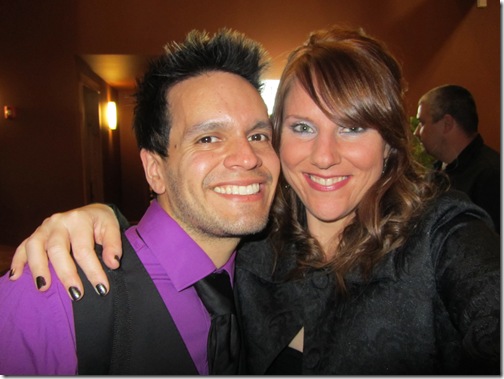 If I told you they left on a huge fireball shooting truck while everyone held gigantic sparklers, would you believe me?

For real. That happened. And someone who saw the flames called the fire department. Perfect end to a unique wedding. 🙂 Congrats Morgan and Don!

We had a lot of fun. I’m always kind of sad to leave my friends and Reno because it’s one of the few places I’ve visited that I would consider moving to. There’s so much to do and it’s just a really fun place. A perfect mix of big city and small town.

20 responses to “Nice Day for a White Wedding”