The Story of Pants

Two and a half years ago, I never wanted another pet. I previously had 2 guinea pigs (a dad and a daughter) and lost both of them when they were about 4 years old. 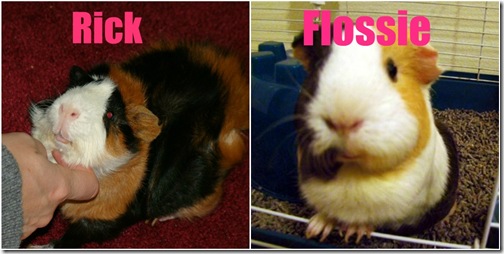 Rick went fast and unexpectedly. Six months later, Flossie died but she was a whole different story. The way she died was super traumatizing (no, I didn’t kill her) and I cried like a baby for a week (yes, over a guinea pig). It was just so sad that I didn’t want to go through that again.

One month later, hubs wanted to go to Subway for lunch and I didn’t. He bribed me with promises of petting guinea pigs at the pet store next door. I’m a sucker for pet stores, so I was in. Only there were no guinea pigs to pet. Instead, there were a bunch of baby bunnies. One in particular was sitting in the corner by herself looking especially pathetic.

That’s when we noticed she had one ear, which made her cute times a billion. (The people at the pet store said they think she was born that way since she didn’t have any wound indications.) Then of course to top off the cuteness, she was the only bunny that would let us pet her without running away. (FML)

That’s when I caved like a fat kid at an all-you-can-eat buffet. I wanted a Subway salad. I got a bunny.

She was so young when we bought her (8 weeks) that the pet store wasn’t sure if she was a boy or a girl, so we couldn’t name her. Hubs and I agreed if she was a boy, we would name her George.

But my offering of “Cupcake” or “Sprinkles” for a girl name was vetoed by the hubs because he is lame.

We really wanted to name her so we looked up bunny reproductive parts online and tried to compare them to hers to figure out her sex, but after awhile that just got creepy.

We suspected she was a girl, but decided to wait to name her until we knew for sure. In the meantime, we had to call her something so a friend suggested Bunnypants because it’s gender neutral. We thought it was funny, so Bunnypants it was. Then we got lazy and dropped the “Bunny.” 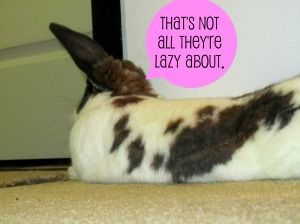 Once she was fixed and it was confirmed she was a girl, it was nearly impossible to call her anything else because we were so used to calling her Pants. We were kinda bummed that we couldn’t name her George and felt like she should have a girl name of some sort, so we put them together and gave her two names – Georgia Bunnypants.

And that is the story of how we came to own a one-eared bunny named Pants.

If you can’t get enough of Pants, here’s some more posts about her:

30 responses to “The Story of Pants”