Saturday morning, after running around trying to get last minute chores done and last minute packing done, I headed over to Michelle’s place to pick her up and leave for Tampa. The drive kinda sucked (for me) because it was so windy that I could feel my little car blowing to the side with every wind gust the whole time. But we made it to the hotel safely, checked in to our room with one king size bed (bow chicka bow bow), dropped off our stuff, and walked over to the expo.

The expo was your basic expo, and by the time we got there most of the vendors were packed up or packing up. Michelle grabbed some Cliff Shots and an iFitness belt, I drooled over the Saucony Cortana’s, and we were outtie.

After taking our stuff back to the hotel and inadvertently getting stuck in a whirlwind of 6’7” hot groomsmen (now I know what it’s like to be short!), we went back out for an early dinner – mainly because we were both already starving.

Dinner was at Pizza Fusion, a place Michelle found online a few days earlier. And man, the place was good. We both had a half salad (pear and Gorgonzola for me). 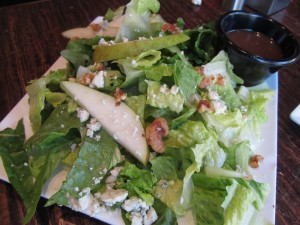 We also shared some stuffed sausage and goat cheese mushrooms.

And we each had our own individual pizzas on a whole grain crust. I was in the mood for pepperoni, which Michelle thought looked like nipples. I’m not sure what kind of nipples she’s been exposed to, but I was concerned.

After dinner, we walked back to the hotel and the weather was still super windy (wind gusts up to 30mph, I think?), which worried me about the race conditions.

We were in bed pretty early (yes, together) and after a dream that we missed the race, I was relieved when we woke up on time. Then I was pissed that we woke up on time. I realize I’m never happy. It was 4:15am after all. And this girl does not do mornings.

We got ready, left for the race, and just missed a mini-monsoon before walking out the door. We wore trash bags to keep warm and dry and ended up pitching them right before the start.

This year, Gasparilla had 2 corrals – one for finishers in 2 hours or less and one for finishers over 2 hours. It was an improvement from last year’s pace markers, but the start was still congested. I think they need more corrals and maybe a waved start next year. Also, I couldn’t understand anything the announcer was saying through the loudspeaker, so I assumed the race started when we all started moving forward. We were in the first corral, which was closer to the speakers, so I’m sure no one could hear anything behind me.

During the race, I didn’t get into my running groove until mile 4 and even then it only lasted for about 2 miles. Honestly, I didn’t feel like running. So knowing I had 7 more “meh” miles to go really sucked. At mile 5, I ran past the port-o-potties I had to stop at last year and was glad my stomach was feeling ok. Not great, but ok. That’s when I had my first half of a PB&J.

While I was running, I was trying to remember what was going through my mind when I ran all of my faster races last year. Then I remembered that I “talked” to my legs. A LOT. If I noticed I was slowing down, I would “tell” my legs to go a little faster. So, that’s what I did through the entire race. I don’t even remember most of my music which was playing the whole time, because all I can remember is talking to my legs and being grateful that the wind wasn’t that bad. For the time being.

There were no timers on the course and I didn’t see a mile sign until Mile 6. I think after that, I saw a sign for mile 8 and 12. There were plenty of water stations and a ton of awesome volunteers. I had my Camelbak on, so I only stopped at 2 water stations but they were completely prepared for the amount of runners, which was nice for a change. (Hear that Rock ‘n’ Roll Series?)

After the turnaround, the wind gusts got pretty ridiculous. At times, the gusts slowed my pace by a minute and a half and I would just try to run through them the best I could. Despite the wind, I was loving being on a familiar (and beautiful!) course because I knew when I was close to the finish and when I should push a little harder.

About a mile to the finish, I knew I was going to make my goal of beating last year’s time. So then it just became a competition with myself to get a “10” in my finish time. And I just made it, coming in at 2:10:52 with a 9:59 pace. That’s 6 minutes faster than last year and over 7 minutes faster than any half I’ve ran in a year.

I gotta say, this race was hard. There wasn’t a point where I wasn’t putting in max effort for how I was feeling. Usually during a half, I have about 7 good miles where they coast by with little effort. No mile was awesome or effortless. Every mile just was.

After the race, I collected my coveted medal.

Just like last year, there were so many goodies after the race – bananas, bagels, fruit cups, Coke products, 5-hour Energy bottles, beer, and bowls of hot black beans from Colombia Restaurant.

We only hung around for a short time. My feet hurt, I was limping from another pair of crap shoes, and we were cold and ready for a shower (not together). We left Tampa for another windy ride home. I dropped Michelle off and then when straight to the running store and returned my shoes…for the third time. So long Mizuno Wave Rider 15s.

Overall, this is still my favorite race.  I love the course, the goodies, and it’s run so efficiently. I’ll definitely do this one again.

Next week, I run the Sarasota Half Marathon which holds my PR from last year (2:02:41). I’m not crazy enough to think I can shave over 8 minutes off my time from this week for a new PR, but this is the last half of the race season, so I don’t see why I shouldn’t give it my best shot. No promises, though.

Leave a Reply to Lindsey @ Happy or Hungry Cancel reply