We start back in 1994 when Constance owned the murder house. Constance, Tate, Addie, and Larry (the burned faced guy before his face was burned) are having dinner. Larry is trying to make nice with Tate and Addie but Tate knows he killed his brother Beau, and Tate’s pissed that Constance even brought Larry in the house after his wife killed herself and their children when she discovered their affair.

Tate leaves the table in a rage and goes upstairs to his room. An indeterminable amount of time passes where Tate does some coke Requiem for a Dream-style, grabs some guns and gasoline, and makes his way to Larry’s work to kill him.

Tate douses Larry in gasoline, lights a match, sets him on fire, and walks away.

Back to present time.

Ben visits Vivien in the hospital and tells her that her twins have two different baby-daddies, how he now believes she was raped by a man in a rubber suit, and that he’s going to help her find out who did it. 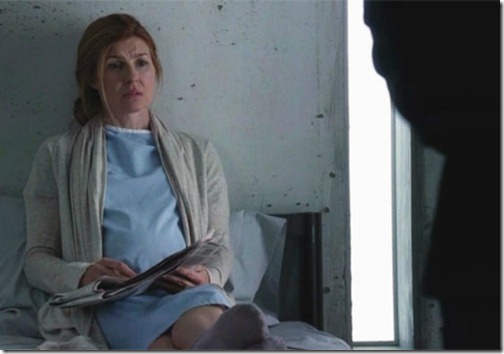 Meanwhile, the police are all up in Constance’s biz because they think she killed Travis (her young boyfriend). They call her down to the police station for questioning where she’s pretty much screwed because her son turned into a mass-murderer and because of all the deaths (Addie, Beau) and disappearances (her husband, the maid) that suspiciously happen when she’s around.

Over at the murder house, Larry is disposing of Travis’ bloody clothes when Travis shows up. Larry finds out Travis has been spending time with two children. Larry looks behind him and can see he’s talking about his own children that burned in the fire. He can see them for the first time and they look like they are still smoldering from the fire.

Then, Larry’s wife appears. When Larry asks why he can finally see her, she tells Larry that he’s almost ready and that Constance isn’t to blame for what happened – he is. Larry promises to make it up to her.

Later on, Constance shows up at Larry’s place and accuses him of killing Travis. He assures her it was someone in the house and he only disposed of the body. Then he decides to turn himself into the police for the murder even though he didn’t commit the crime.

While Larry is in jail, Constance visits him. He tries to get her to admit that she did really love him but she is all, oh no I didn’t. And then she is all psych! I’m not putting my hand on the window after all!

Back at the house, Ben gets a visit from an officer who threatens to take Violet to juvenile court because she hasn’t been to school in over two weeks. Ben talks to Violet about how she’s been missing school and she promises to meet Ben to talk about it but Tate intervenes and wants to spend the day with her instead.

Ben decides boarding school might be best. He calls a school about registering Violet while Tate eavesdrops. Tate gets pissed Ben wants to take Violet away so he dresses up in the rubber suit and attacks Ben and his wet, muscular abs after he gets out of the shower. Pillow fight!

Tate doesn’t kill Ben because he’s a great guy like that. He just wants to make sure he and Violet can have some time alone without Ben interfering. So he chloroforms Ben, but not before Ben sees who’s under the mask.

After the post-shower tousle, Tate finds Violet and tries to convince her that they need to be together forever and if they commit suicide, she won’t have to go away to boarding school. Violet runs screaming that Tate is trying to kill her but Ben is out cold.

When Tate finds her, she runs outside to escape him only to end up back in the house. She tries over and over to leave, but she always ends up back inside. Violet is scared and doesn’t know what’s going on so Tate tries to calm her down. 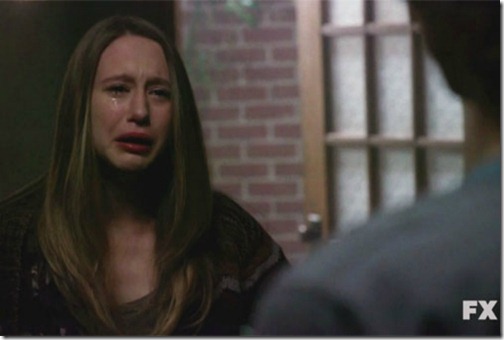 Tate tells her that he wants to show her something and she can go wherever she wants to afterwards. So, Tate takes her into a crawlspace in the house and shows Violet her own rotting corpse. Violet is dead, ya’ll!

Tate was unsuccessful trying to revive her after her suicide attempt and has been trying to protect her from finding out this whole time while Violet thought she was protecting Tate from finding out he was dead. Nope. He’s known all along.

This episode may be my favorite since Piggy, Piggy. Evan Peters does such a great job making Tate sympathetic and a monster at the same time.

Tagged as American Horror Story, I Watch Too Much TV, recap, Smoldering Children