The Road So Far

Today (and maybe as you’re reading this) I will be running my first marathon. But I wouldn’t be doing it if it wasn’t for my friend, Michelle. We weren’t always addicted to racing (and blogging). I met Michelle at work about 6 years ago and I’m pretty sure 80% of our conversations had to do with Veronica Mars. We had a lot of mutual friends at work so we hung out fairly often. I think this is one of the first pictures we’ve ever taken together. And even then she found my lap irresistible.

Michelle made me the center of her personal photo shoots very early. Here, I was wowing her with an exposed bra that I found perfectly acceptable to wear in public.

This was at a 60’s birthday party where I was one of the only people dressed up. Not weird at all. Also, I don’t normally tease my hair on top. I stopped doing that in very early 2011.

We even attended some work holiday parties. Looks like I worked out the exposed bra by this time. Looks like I’m also working out my comedy routine. The kids love it.

After Michelle left the job we were at together, we kept in touch through email but didn’t hang out at all. Then one day, I got the bright idea to sign up for a half marathon and told Michelle about it. She told me it was the best idea I had since I decided to stop teasing my hair. 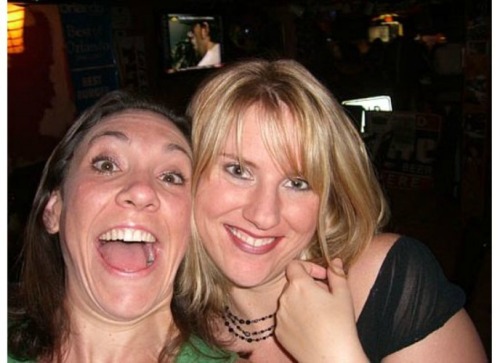 It was ON. Ever since then, we have run two 5ks, one 15k, and seven half marathons together.

Good luck today, Michelle! Thanks for being the only person I know willing to be my running buddy all this time and willing to travel all over the place to do it. If you see me passed out at the finish, please put the booze in arm’s reach for when I come to.

Tagged as Friends, My first marathon