I’m having Halloween anxiety. This happens every year right before Halloween. I have a minor breakdown because I don’t know how I want to dress up. I won’t dress up unless I get inspired somehow and I usually don’t do repeat costumes. So, the day before Halloween, I pull something together in an all-day-long rushed panic. Here are some of the fruits of my panic attacks:

I got pulled into a work costume contest that I didn’t want to be in. Damn peer pressure. This was after Britney’s first kid but before she was pregnant with the second one. I must have had a sixth sense about her womb because I was also carrying around an infant baby doll because I thought it was funny. Everyone made comments that she only had one kid. Ha! Well, I showed them. Later on, when I asked someone to guess who I was, she said Jessica Simpson. *fail*

I’m at another work costume contest here, but this time I refused to enter. (I know no one believes me, but I’m shy.) I couldn’t find a necklace, so I had to buy those beads and make it myself. Then, I couldn’t find a green strapless dress anywhere. So the night before I had to dress up, I went to Wal-Mart and bought a couple yards of green fabric and tucked it into a black strapless dress I had at home. Party City has this costume now. That would have come in handy 5 years ago. 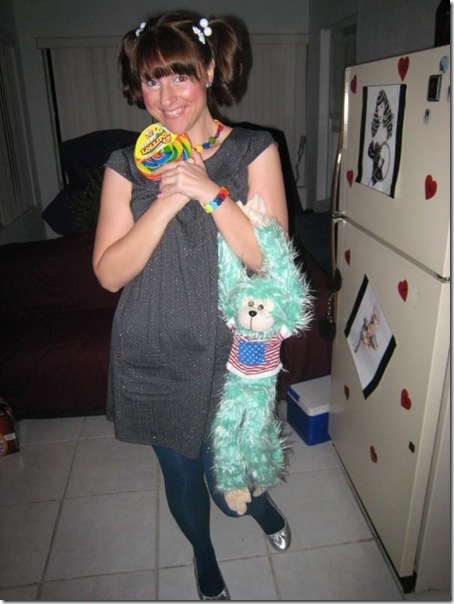 The only thing worse than this costume is people who dress up in their pajamas for Halloween. I had plans to go to a party and wasn’t going to dress up because I was uninspired. Then I changed my mind at the last minute and panicked. This was basically all stuff I already had in my closet paired with a trip to Claire’s for kid’s jewelry. 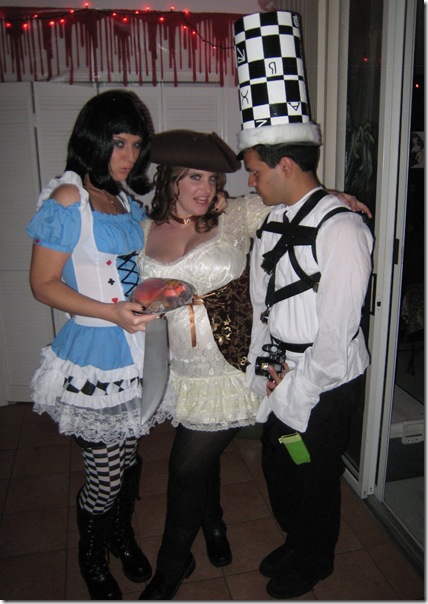 This one was more planned. I was Alice from American McGee’s Alice. Not only is that a video game, but it’s the first video game that I was into in the biggest nerd-like way. Hubs was the Mad Hatter. The naughty pirate is not from the game, by the way. 😉

This was last year. I ordered the whole costume from HBO online thinking I was clever and 2 weeks later they were at every freakin’ Hot Topic. Let’s just say I was not the only Sookie at this party.

Thank you Kohls, for your horrible Avril Lavinge clothes line. We were going for a rock band type of theme here. Hubs was Rob Zombie. This wasn’t Halloween though. Most likely just a quiet Tuesday night at home.

And last but not least, something to offend everyone… 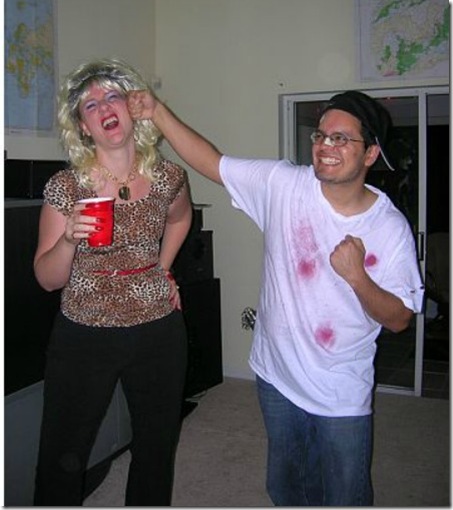 Hubs was my abusive, fight-picking boyfriend. To be fair, I really wanted to be Peggy Bundy but couldn’t find a red wig anywhere. So, this is what I ended up with.

This year, I’m doing a repeat outfit for work (that I didn’t post here, but will post later) and I’m still deciding on what to do for a Halloween party this weekend. T minus 3 days until I start freaking out about it! 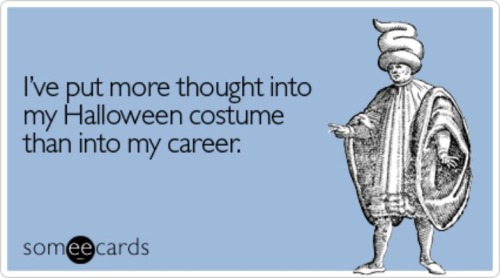 What are you going to be for Halloween?

Check out a couple of my hub’s previous costumes, if you’d like. (He makes them himself!)