Since I had so many questions about the  Flashback Friday Burning Man post, I thought I would do a Q and A. You guys asked some good questions! Here they are:

The Kidless Kronicles (who has two blogs) asked:

I wonder whose idea Burning Man was!? How did you find out about it?
Burning Man started as a bonfire ritual on the summer solstice by a guy and a few of his friends. You can read more about the history here.

I found out about it through our friends who went the previous year. Hubs wanted to go bad, so he bought tickets. It wasn’t really my type of thing so I was pretty apprehensive at first. Knowing we were going with friends helped though.

How hot was it there?
It’s hot during the day. I think the average temperature was in the 90’s. Even though it’s hot during the day, it’s a dry heat. (Ugh, I hate when people say that.) But, take it from someone who lives in Florida – dry heat is way better than humid heat. When you’re too hot in dry heat, you can stand in the shade and cool down because the breeze is cool. In humidity, you don’t cool down in the shade because because the breeze still feels like a furnace.

For the most part, I wore shorts, a bathing suit top, boots, goggles around my neck, and a scarf (for the dust storms) during the day.

(Side note: There was no one on the other end of the line. But we had to wait for a woman that had a 10 minute conversation before us to get this picture.)

It was cool at night, somewhere in the 40’s-50’s. So we wore jackets and warmer clothes.

What were your essentials? Anything you recommend bringing?
Burning Man has a survival guide that is published every year. It’s required reading and they tell you everything you need to know about what to bring. I could give you a list of what I’d recommend bringing, but it would be long.

This was the inside of our little trailer and all our stuff packed into it. I think for never going before, we did pretty well bringing what we needed. Next time, I’d definitely bring a warmer jacket though. I had to borrow one from Morgan on a couple of colder nights. 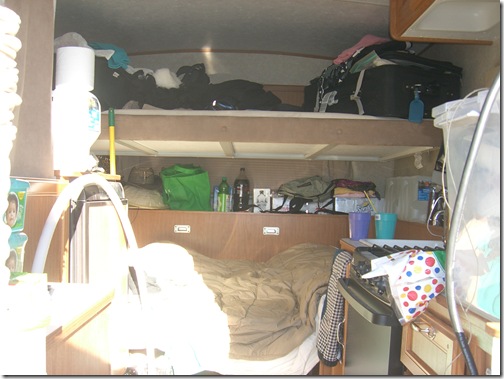 Who plans the events?
Attendees sign up to be a participant and I think have to go through some approval process to get on the event list. A lot of the attendees go to Burning Man every year and set up the same theme camps.

For instance, the Barbie Death Camp is one of the theme camps that have been there several years in a row. 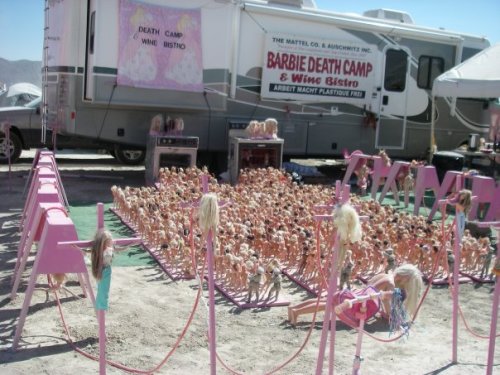 (Pic stolen from Morgan. Thanks, Morgan!)

Did they have trailers to rent when you got there? Or did you have to rent one in Reno and drive with it the whole way?
No. You have to rent (or own) a trailer before you arrive. Some people just drive in with tents or sleeping bags and some find strangers to give them a ride in. It’s really what your more comfortable doing. We rented from the place we did because they had the trailer set up on sight when we got there. We didn’t have a car so we wouldn’t have been able to get a trailer there without renting one. That would have been a lot more money when we were already spending a ton to get there in the first place.

Our trailer rental came with bikes to use for the week. I would say that a bike is probably one of the most important things to have. I can’t imagine trying to walk the area the whole week. It would take forever.

If you rent a trailer, you need to do it far in advance. I think we rented ours 8 months in advance and still most of the places in Reno and the surrounding towns were booked. The people camping next to us rented their trailers in San Deigo and drove them up.

Showering?
Don’t expect to do a lot of that. And even when you do, you don’t stay clean for long because of all the dust. We had a shower in our trailer but it didn’t have hot water. And it was uncomfortably small. I could sit at any point in the shower and be sitting on the toilet. I washed my hair twice during the week and it sucked because it was so cold.

Our friends Morgan and Don set up a water bag on a pole in the sun and stood in a kiddie pool to shower outside of their trailer.

How much food/beer did you bring for a week and was there a store nearby you could go to if you ran out?
We didn’t bring beer, but we brought a huge bottle of tequila and vodka that were gone at the end of the week. Our friend, Don, brought 100 beers (for himself!) so he wouldn’t run out. He shared those with us as well. Plus, people give you alcohol all over the place at Burning Man. (Remember, it’s no commerce, giving society.)

There are no stores nearby. Burning Man is about a hour away from the first gas station and an hour and a half away from the nearest town. If you leave, you have to pay to get back in.

Was it peaceful?
Sometimes. We stayed on the outer circle, so it wasn’t as loud as the inner circle where most of the people camp. But, we still had camping “neighbors” on all sides of us. We also had to sleep with earplugs because there is constant bass from all the music, usually until 7am. If you’re staying closer to the inner circle, I wouldn’t imagine you’d get much sleep. However, it was really easy to bike out into the middle of nowhere (where it was quiet) and enjoy the artwork.

The more awesome pieces of artwork usually had more people around. 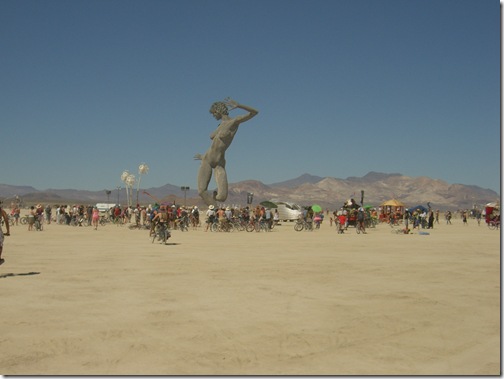 For the most part, you are around people the whole time.

Do you plan to go again?
Right afterwards, I said no way. But now I kinda miss it. Hubs was talking about going again next year but I really want to go to Alaska. It’s one or the other because Burning Man was the most expensive vacation we have ever taken. We had to buy the Burning Man tickets ($200-$400, depending which tier you get), buy the plane tickets to Reno, rent the trailer, and buy supplies for the week. We were really lucky to have friends to stay with in Reno, otherwise that would have been another cost for lodging before and after the festival.

I do think we will go again. It’s an experience like no other, even though that sounds lame to say. Maybe in a year or two?

Jim @ Biking My Mass Off asked:

How do they determine which man to burn each year? Is it a randomly drawn or is there some kind of ceremony?
There’s a vote. Usually they pick the dad types with 2 adopted boys. Know anyone like that?

Ok, I hope this was helpful! If you have any other questions, feel free to ask in the comments. 🙂

Tagged as Burning Man, Flashback Friday, Q and A

11 responses to “Flashback Friday: Burning Man Q and A”