I’ve done a lot of “Run” posts lately, so I thought I’d bestow some “Watch” upon my loyal follower. I’d make that word plural, but I’m pretty sure only Tiffany reads this. And only because she’s bored.

So last night I watched Repo Men while the Hubs worked out. Yes, I was the lazy one last night.

I wanted to see this movie after unexpectedly enjoying Repo! A Genetic Opera. The movies are completely different, but the plot is the same. Repossessing organs?  Yes, please! 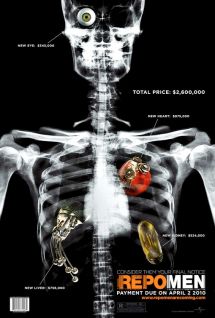 Plus, I like any movie that can be creative enough to create a poster without “floating heads.” If you don’t know what I mean, let me show you:

Repo Men stars Jude Law and Forest Whitaker as life-long buddies who become repo men in a future were people can buy organ transplants at hefty prices. When people default on organ payments, the repo men step in and repossess their transplanted organ – leaving them for dead.

Jude and Forest’s relationship can be summed up like this:

Notice Jude Law actually picked up a dumb bell for this role (no, not Forest) because I’ve seen that boy without a shirt on and he doesn’t look like he lifts anything but a cigarette to his mouth.

Jude is involved in an accident during one of his repos and ends up with a heart transplant.

This is the accident. He accidentally did a split while
ironing with two hands in the air.

His new heart gives him a heart (collective “ahhh”) and now he sees his repossessions as actual people with families instead of “just a job.” Jude can’t repo anymore!

I’m sure you can guess what happens from here. Jude defaults on his payments now that he’s not making money from his repo gig, and he goes on the lamb with a lounge singer he has the hots for – who also has defaulted on organ payments.

Repo Men had it’s moments and was good enough that I didn’t want to turn it off in the middle. If it’s on and you have nothing else to do, go for it.

Just don’t mistake it for this movie: 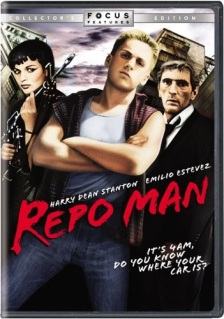